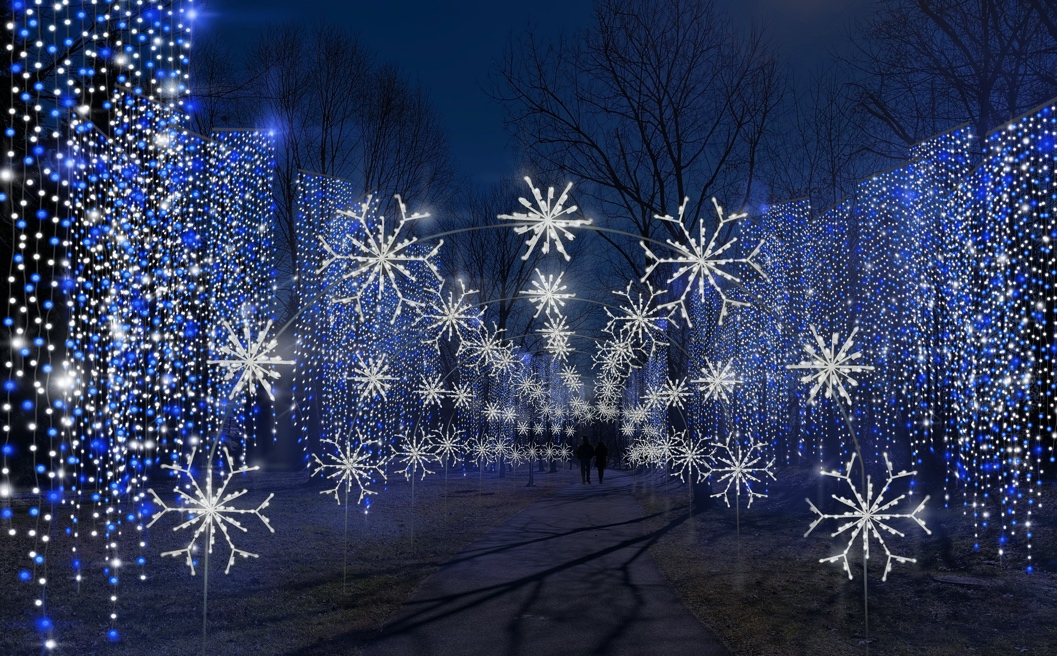 Pigeon Forge Winterfest will be bigger and brighter this year with 20 new larger-than-life nature-themed outdoor lights displays. Upon completion this year, the displays will add one million LEDs to the city’s displays.

The all-new Winterfest Wonders of Light Walking Trail represents a $1.5 million investment in the Pigeon Forge Winterfest celebration which will expand to include the city’s Riverwalk nature trail.

When the city-wide festival begins on Nov. 10, visitors can get a first glimpse of the new displays. Programmed to music, the 20 new displays, some standing more than 25 feet tall, will include walk-thru arches, a colorful 52-foot-long caterpillar, larger-than-life flowers, and Old Man Winter. Vibrant snowflakes, shooting stars, snow people, and a 20-foot-tall ice fountain will light the way as deer, bears, frogs, and squirrels—ranging in size from 13 to 19 feet tall—frolic alongside the path while lights that mimic fireflies and butterflies dance in the trees overhead.

One mountain wildlife display will feature an enchanted forest with seven-foot-tall mushrooms amid a field of dandelions and brightly colored flowers. A second will invite visitors to explore a nature scene that is home to various woodland creatures, including a 16-foot-tall turtle, a 13-foot-tall grasshopper, a 17-foot-tall dragonfly, and a 19-foot-tall firefly, and a 16-foot-tall frog, all surrounded by six-, seven- and eight-foot-tall wildflowers.

Pigeon Forge Winterfest, a three-month event featuring more than six million lights, is one of the country’s largest free outdoor lights festivals. More than two million visitors annually flock to this Great Smoky Mountains gateway city to experience Winterfest. The expansion brings the total number of lights displays to 40 located along or near the city’s Parkway, Pigeon Forge’s major thoroughfare.

The addition represents the largest single investment in Pigeon Forge Winterfest, a celebration that began in 1989. This year’s event will continue through Feb. 19.

“Pigeon Forge Winterfest is one of our city’s most popular events that has transformed a shoulder tourism season into one of our busiest and most successful,” said Pigeon Forge City Manager Earlene Teaster. “The Winterfest Wonders of Light Walking Trail, a $1.5 million investment, represents our city’s commitment to offering our visitors something new to experience with their families and friends, and it also showcases Pigeon Forge’s scenic Riverwalk nature trail.”

About the Winterfest Wonders of Light Walking Trail

Upon completion, the Winterfest Wonders of Light Walking Trail will span the Riverwalk from the access point in the city’s Municipal Parking Lot (located at 2936 Teaster Lane between the LeConte Center and The Island in Pigeon Forge) to the approximate intersection of Old Mill Avenue and Butler Street (near the Old Mill Historic Square). Upon completion, visitors can access the light displays via the six-mile out-and-back Riverwalk which has several access points, including one at the city’s Patriot Park, the LeConte Center at Pigeon Forge, the Old Mill and the city’s Municipal Parking Lot, the latter of which also offers free parking for trail guests.

The Winterfest Wonders of Light Walking Trail is paved and mostly flat. It is pet- (leashes required) and wheelchair-friendly.

More information about Pigeon Forge Winterfest is available at MyPigeonForge.com or by calling 1-800-251-9100.