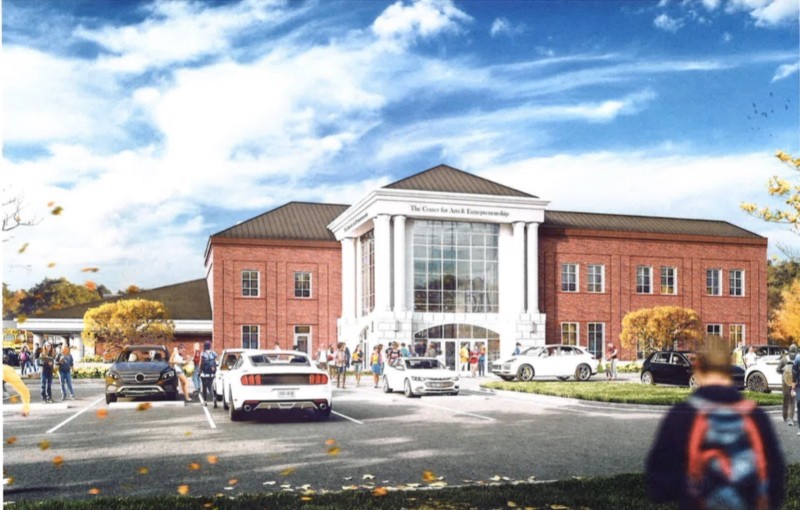 Battle Ground Academy has completed construction on the Sondra Morris and Robert N. Moore Jr. ’52 Center for Arts and Entrepreneurship located on its Glen Echo campus in Franklin. The $14.5 million project was started in September 2019 and includes over 33,000-square-feet of new construction and more than 10,500-square-feet of renovated space.

The Sondra Morris and Robert N. Moore Jr. ’52 Center for Arts and Entrepreneurship is named in honor of the late Moore, a BGA alumnus and former board member, and Morris, a long-time friend of the school and close companion of Moore. Within the building is the Yarbrough Family Center for Entrepreneurship.

“We are fortunate to have great supporters of our school such as Sondra and Bob, Bill Armistead, a 1969 BGA graduate, and Jon, Kathy and Amy Yarbrough who have served as leaders of this campaign and helped ensure this project became a reality despite a worldwide pandemic,” said BGA Head of School Will Kesler. “We laid out a strategic plan nearly seven years ago that included a visionary facility like this and it’s incredible to see it come to fruition. It is a true separator for BGA in our community.”

The building will serve as the home for BGA’s performing arts department and features a 550-seat, state-of-the-art theatre. The previous performing arts classrooms are connected to the new building and have been fully renovated to include makeup and dressing rooms, as well as a black box theatre.

“With the addition of the Center for Arts and Entrepreneurship, we now have unmatched facilities that will allow our performing arts program to continue to thrive and grow to its full potential,” added Kesler.

The Yarbrough Family Center for Entrepreneurship will serve as the home for BGA’s Entrepreneurial Leadership program. It features four entrepreneur-focused classrooms, five breakout spaces – including one with audio/video equipment for recording presentations and vocal performances and a maker space with 3D printers, a laser cutter and miter saws.

“Entrepreneurial Leadership has become a cornerstone of our Upper School curriculum with more and more students participating in the four-year program,” said Kesler. “We now have facilities that rival anything in the country at the high school level and, in many instances, that are in line with some of the best collegiate entrepreneurship programs.”

Launched in 2015, BGA’s Entrepreneurial Leadership is one of the few four-year comprehensive entrepreneurship programs being offered by high schools in the country. It equips students with skills and mindsets to creatively solve real-world problems through hands-on active learning.

Established in 1889, Battle Ground Academy is a coeducational, college preparatory school for grades kindergarten through 12th grade. More information on the school can be found at www.battlegroundacademy.org.