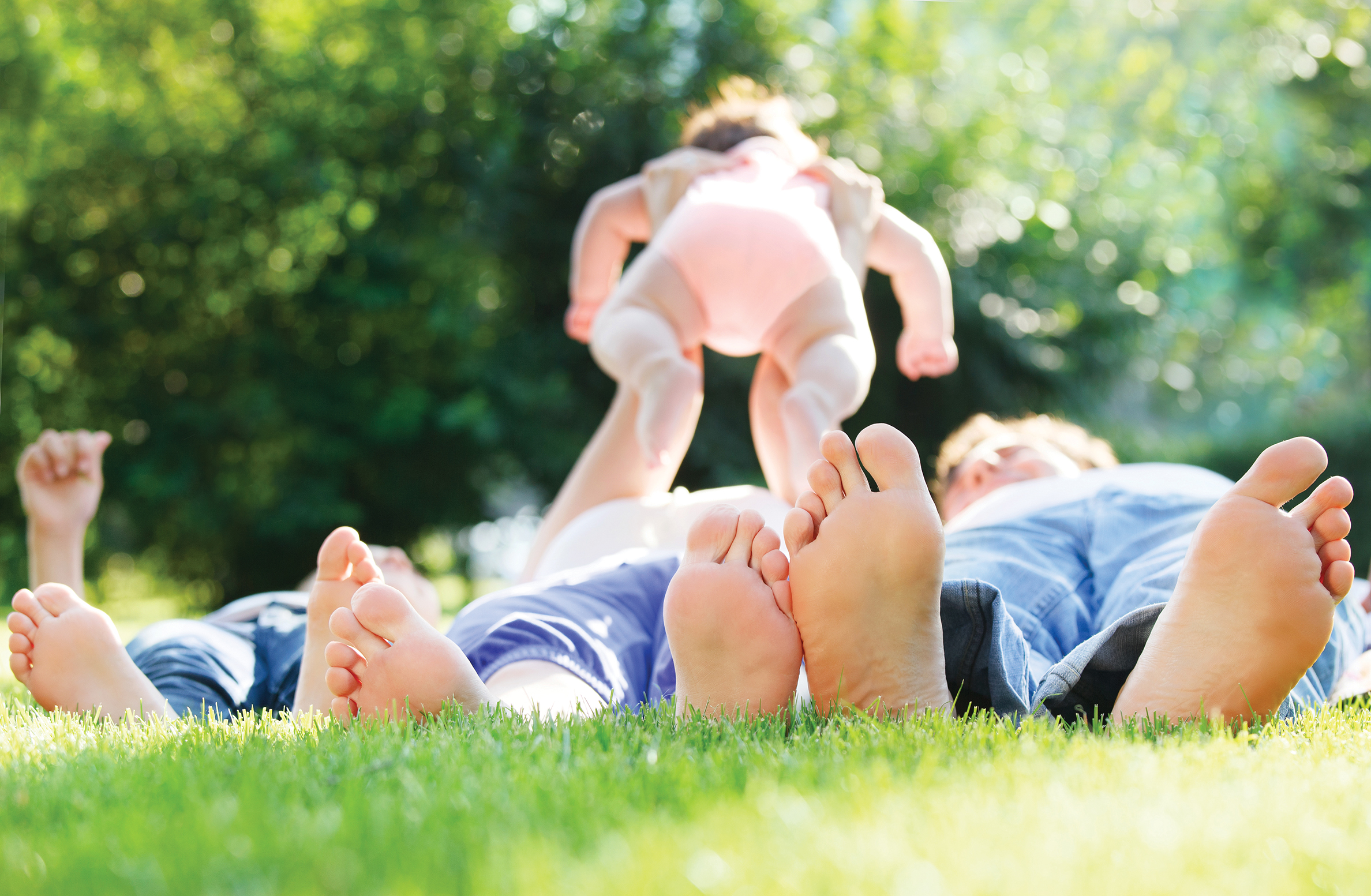 Karen Jackson says that if she believed everything she read about the horrors of isolation for young children over the last two years, she’d be a basket case. Jackson delivered her first baby, a girl, during the early years of the pandemic in 2020. Her little family went immediately into lock down, filled with concerns and worries about the future.
“I thought we would do some mommy-and-me music or movement classes when she turned 6 months old, but everything was shut down except for virtual, and that wasn’t what I wanted to do. Luckily, I sort of stick my neck out pretty easily, not a lot of fearfulness,” Jackson says. “But I have friends who still have a lot of anxiety about everything. I can sort of tell that they’ve passed that on to their kids. To me, it’s a lot of unnecessary fear, or at least it hasn’t helped,” she adds.
Two years later, Jackson’s daughter, Emma, is a handful of energy and a little chatter bug at home.
“My mom is a teacher,” Jackson says, “So she taught me about drawing Emma out and about how important it is to talk to Emma and get her to be responsive. It’s a constant. I say things like, ‘Nana said, hi!, so, say, hi!, Emma!’”
But other parents realize the need to socialize their baby when they’re around others and their baby is fearful.

A study from Columbia University Irving Medical Center found that babies born during the pandemic scored lower on tests of gross-motor, fine-motor and social skills at 6 months compared with babies born earlier. Parents need to intervene beyond the comfortable walls of their own homes.
Of course, parents socialize their babies naturally from birth in the way they engage with them. Making eye contact, smiling, talking and singing to them helps them get a sense of turn-taking. Experts believe that infant socialization is the foundation of communications.
When your 1-year-old child wraps his little arms around your neck and lays his head contentedly on your shoulder, it’s probably hard to imagine that he needs more than your love, care and affection. But if you take him to a gathering where there are other babies and young children, you can see how he perks up. Your child connects with them in a way they cannot connect with you. He watches them in rapture. This interaction is something they need and enjoy — children speak to each other in a language all their own.
Parents who stayed home with their babies and toddlers during the pandemic now face a dire challenge for their kids. They need friends. Eventually, your little bundle of joy, with eyes only for you, will want a playmate her own size.

Most young children between the ages of 1 and 2 thrive in a playgroup, psychologists say. The benefits extend beyond pleasure, says Dr. Michelle Boyer-Pennington, professor of psychology at Middle Tennessee State University. Boyer-Pennington specializes in early childhood development and stresses the importance of same-age peer play for toddlers.
“Peers are important agents of socialization,” she says, noting that same-age peers serve a different role than parents and older family members. Parents and older children tend to place the baby or toddler in a subordinate role by commanding them or overseeing their activities. 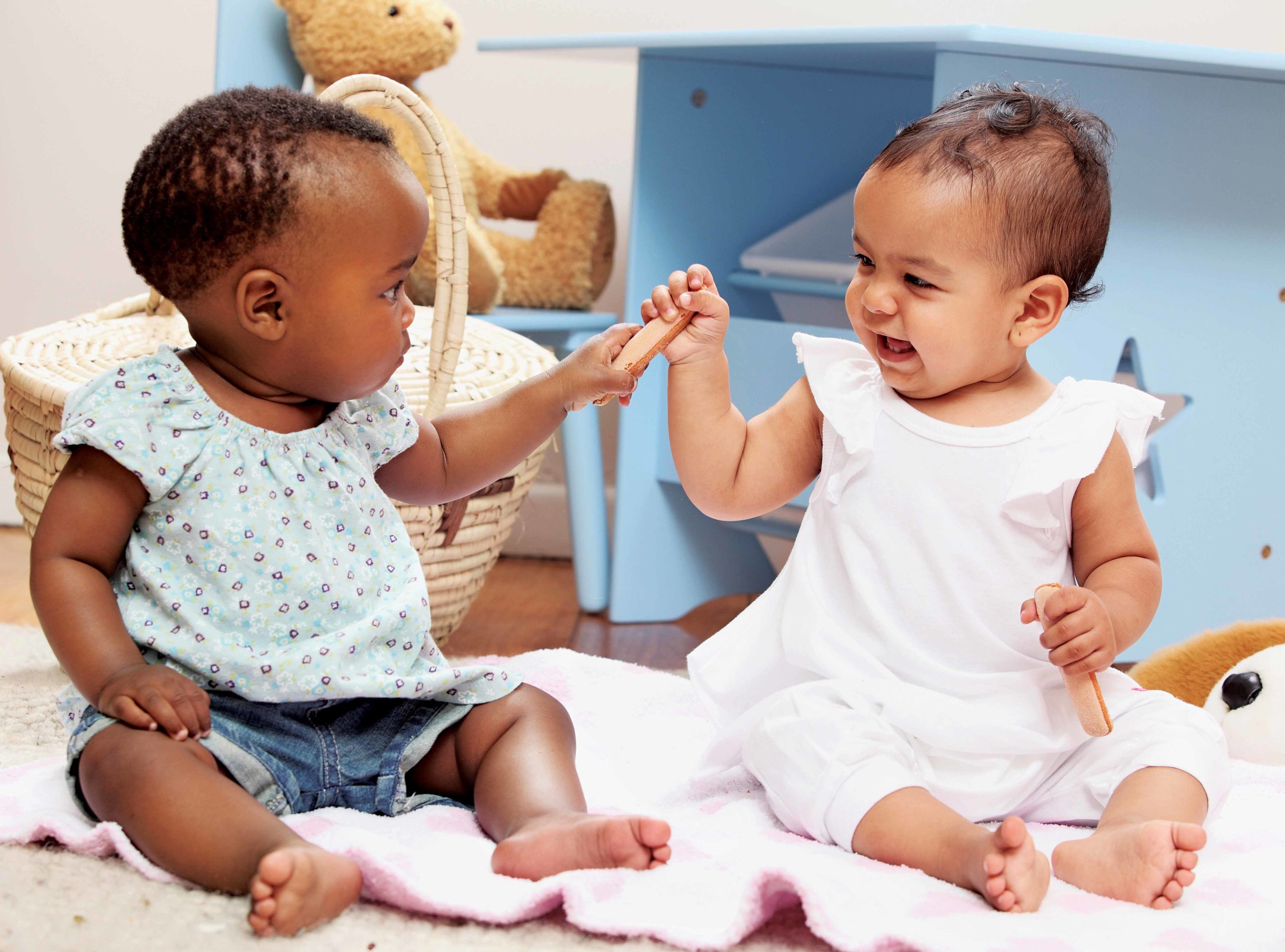 Socialize Your Baby: Little ones thrive when they are given ample opportunity to meet others their own size.

“Same-age peers are much less critical and directive,” explains Boyer-Pennington. “Children are freer to try out new roles, ideas and behaviors, thereby acquiring many social and personal competencies they might not otherwise learn in the parent-child/older sibling-child relationship.”
She notes that toddlers confined to the company of adults could have socialization problems that continue into adulthood. Researchers say that young children who are denied the opportunity to interact with peers often have social difficulties during later peer interactions as well.

Expose Kids to Other Kids Early On

Most older babies enjoy seeing other babies and children, but at what age does it become an actual need for interaction with them?
“I think that children should have some exposure to other children at as early an age as possible,” Boyer-Pennington says. Babies become responsive to other children’s emotions and actions at approximately 6 months of age. Boyer-Pennington suggests that at this age it does not particularly matter whether playmates are of the same age. However, by the age of 18 months, toddlers are able to interact with each other in a social manner.
“In particular, children this age take great pleasure imitating each other,” she explains. “They often gaze and smile at their partners as they turn their imitative sequences into social games.”
By 20 to 24 months, toddler play has a strong verbal component, and playmates often describe play activities to each other or attempt to influence the role their partner should assume. By 2- to 2-and-a-half years, play is even more coordinated, as reflected in the child’s ability to engage in complementary roles, such as chaser and chasee in a game of tag.
Although most toddlers will respond positively to other children, shy children may need encouragement to participate in group play. Start slowly and remain positive. If your toddler does not want to join a group of children, let them watch them by your side. Try approaching other children together and asking if you can both play. Make sure to retreat when they feel comfortable within the group. Through this type of positive interaction, most toddlers are able to overcome shyness and establish successful peer relationships

Playgroups and Other Options 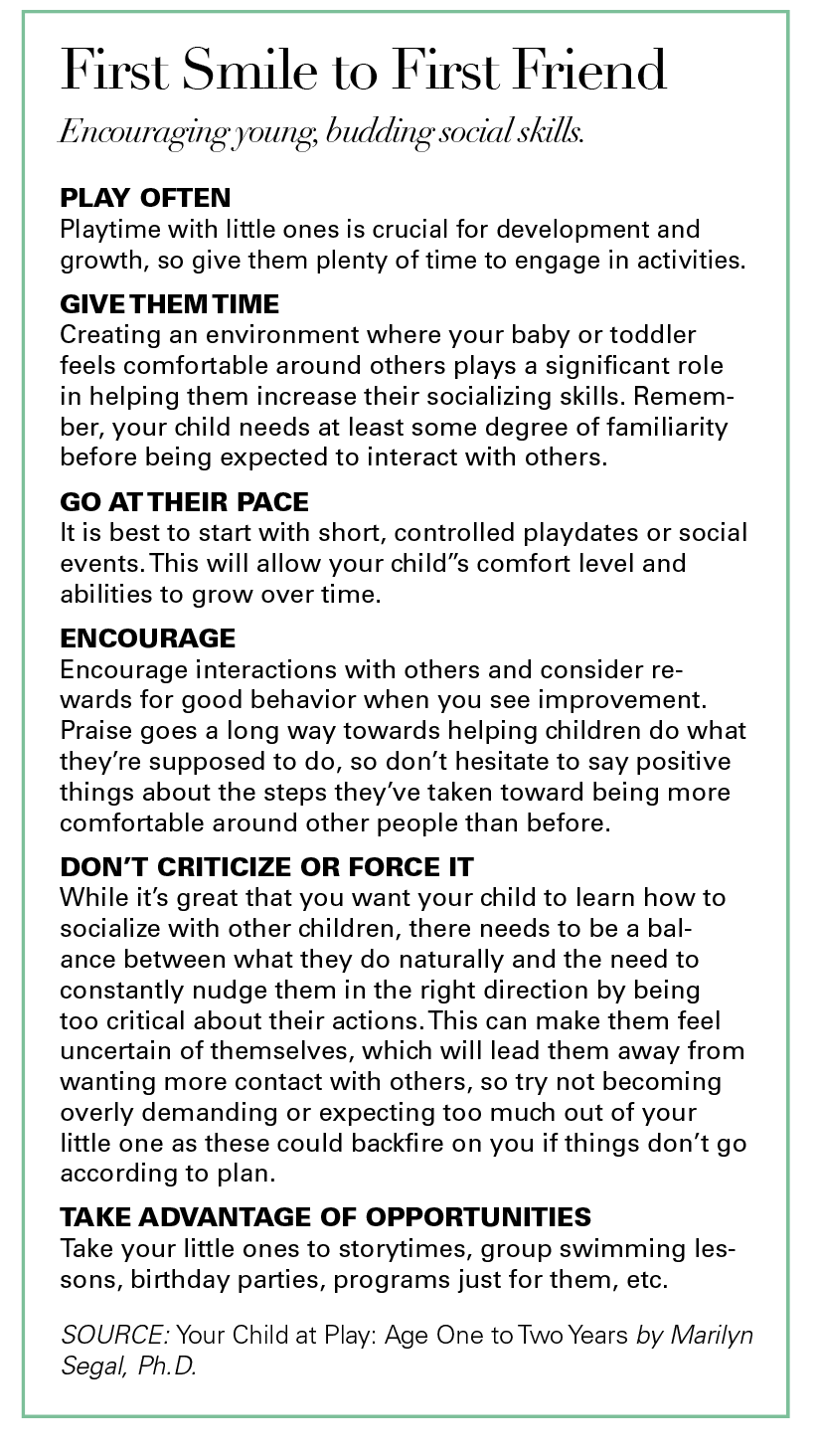 For parents seeking a social setting for their little ones, there are a number of classes and programs for babies and toddlers which the parent or guardian also attends.
My Gym is the nationally franchised program offering developmental play for babies as young as 3 months up to children 9 years of age. Parents of children ages 3 and under participate in the classes and help their babies and toddlers learn skills such as hanging and tumbling. Other popular programs include Kindermusik — the early childhood music and movement program that uses music and parental guidance to nurture a child’s cognitive, emotional, social, language and physical development. And don’t overlook library storytimes and art programs for little ones such as with The Little Art House and more.
But remember, instructional programs are no substitute for unstructured play.
Bringing young children together does not always result in instantaneous group play. Most 1-year-olds participate in parallel play, playing side by side but not with each other. This does not mean they are not enjoying and learning from the other child’s presence. Marilyn Segal, Ph.D., writes in Your Child at Play: Age One to Two Years, (William Morrow; 1999), “even when they are not playing together, toddlers spend a good deal of time watching and imitating each other.”
Remember, play is child’s work. By providing companions and outgoing activities, you are not only making your child’s life more exciting, you are paving the way for a lifetime of friendships.