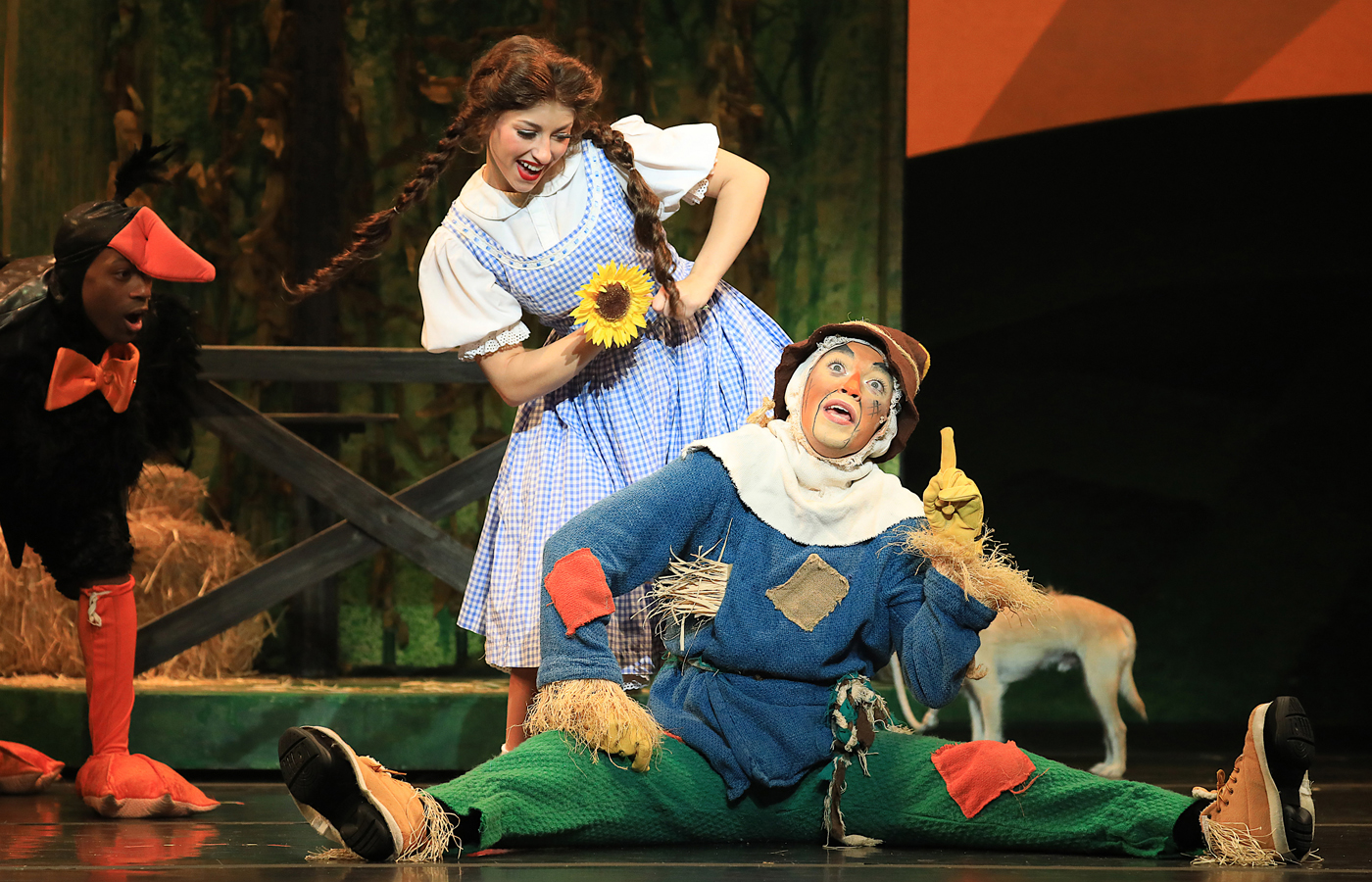 A delightful journey into the merry old Land of Oz awaits your family with the Apex Touring theatrical production of The Wizard of Oz that's at TPAC for a short run this weekend only. The full house on opening night was bursting with lots of happy families with kids of all ages. The production is a magical, heartwarming adaptation of one of the most beloved stories of all time.

This musical is based on the 1939 MGM film starring Judy Garland, Ray Bolger, Burt Lahr, Jack Haley, Margaret Hamilton, Billie Burke and Frank Morgan. The iconic movie celebrates its 80th anniversary this year. The book it's based upon — L. Frank Baum's The Wonderful Wizard of Oz — celebrates 119 years this May.

This multigenerational story needs no introduction (unless you've been trapped in a storm cellar for the past century). It's massive appeal is evident based on the opening night crowd at TPAC. Everyone from gleeful 5-year-olds to cheerful senior citizens got to escape to a place "over the rainbow" and experience the joy of sharing their common adoration for a lovely, timely story.

The show incorporates projections within its scenic design, particularly in the Kansas scenes, which adds spectacular elements. When the tornado arrives, a downstage scrim drops trapping Dorothy's house between it and the upstage screen. Swirling dual projections make it appear as though the house is truly caught up in the eye of the cyclone, and it's a magnificent effect.

The transition from the sepia tone world of Kansas to the brilliant color of Munchkinland is awesome. Glinda's descent in a shimmering pink bubble results in delightful oohs and aahs from the crowd. It's mesmerizing to see the Wicked Witch flying with ease on her broom above the stage in a couple of scenes. Likewise, its captivating to watch her melt once Dorothy splashes her with the bucket of water.

Kalie Kaimann delivers a heartfelt performance as Dorothy Gale throughout the show. The talented vocalist wins the audience over early on with her lovely rendition of the musical's signature song, "Over the Rainbow."

Crossville, Tennessee, native Katherine Walker Hill is a charming Glinda (she does double duty as Aunt Em). She brings a sincere sweetness to the Good Witch of the North as she helps guide Dorothy home.

Dorothy's three Ozian best friends are fun to watch onstage. From Jack Saleeby's nimble Scarecrow and Nick Gurinsky's tap-dancing Tinman to Nicholas J. Pearson's impeccable Cowardly Lion, there's a lot to love here. Pearson is a top-notch talent whose comedic ability perfectly endears the Lion to the audience. Furthermore, his hefty vibrato-blessed performance of "If I Were King of the Forest" is both commanding and inspiring … and humorous in the appropriate places. Can't wait to see what else is to come from this gifted young actor.

There are occasions throughout the production where cast members overact. While those moments of exaggeration get extra laughs from pint-size audience members, they can become a bit tiresome to savvy theater patrons. This is most evident with Emily Perzan's Wicked Witch. Throughout the show, the Wicked Witch comes off more comical than sinister. It creates an awkward dichotomy within the character. However, Perzan nails the signature cackle, and when she's flying over the stage on her broom, the audience gets the menacing side to the character.

In addition to the human cast members, a crowd favorite is Murphy, the adorable white Brussels Griffon/Terrier mix playing Toto. The playful pup adds a festive touch to the show, whether he's stealing the hot dog off of Professor Marvel's roasting fork, or dancing on his hind legs.

You'll experience all the songs from the movie along with some extras. The Munchkinland numbers are among the best. They are a true celebration, especially "Ding Dong! The Witch is Dead." The bright costumes and fantastic choreography present a truly joyous affair.

In addition, this stage adaptation includes the fun, jazzy "Jitterbug" number in Act II. It's fantastic for the audience to witness. In case you're not aware, "Jitterbug" was a number originally filmed for the 1939 movie, but it got cut in the final edit (see footage of it here). As a side note for Oz movie enthusiasts, the cutting of the number creates the biggest continuity problem in the film. As Dorothy and pals enter the Haunted Forest, the Wicked Witch tells the leader of the flying monkeys that she's sent "a little insect on ahead to take the fight out of them." Of course, it doesn't make sense since the "Jitterbug" number was cut from the film, but it's awesome that this stage production includes it.

The Wizard of Oz is definitely a festive outing with your kids that upholds the heart of the story —  no matter how far one may wander … even into colorful, magical, far-away lands … at the end of the day, there's no place like home.