The parking lot has been transformed and is now home to the "Belcourt Theatre Drive-In" where guests can enjoy movies on a 30-foot wide screen and listen to the soundtrack through their car’s FM radio.

At 95-years-old, you'd think the Belcourt Theatre wouldn't be the ones offering innovative ways to keep classic films going — but you'd be wrong. 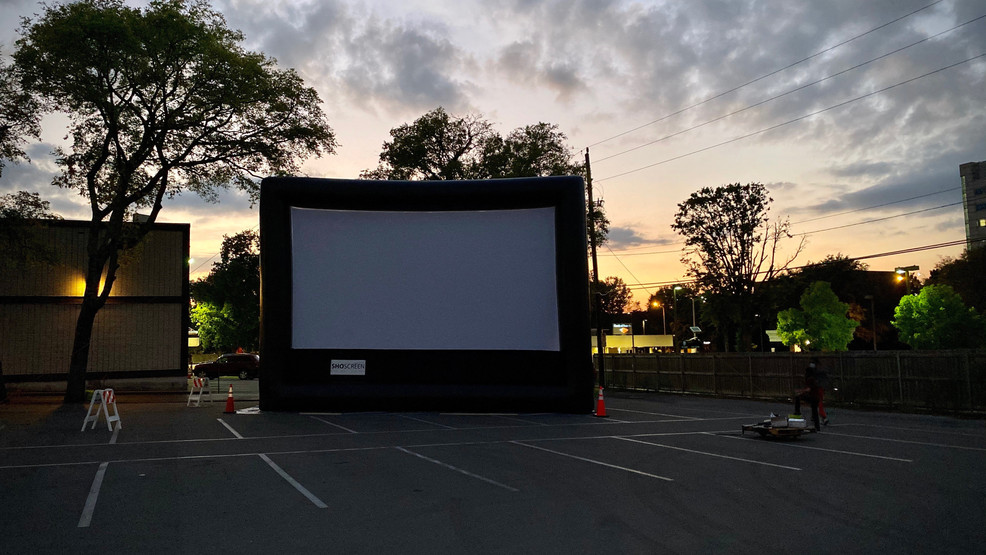 “We’re delighted to be launching this new way to once again watch movies on the big screen,” says executive director Stephanie Silverman. "Since we closed in mid-March due to COVID-19, we’ve heard again and again from people telling us how much they miss the Belcourt. And we’ve missed our audiences too."

Movies will be projected onto a 30-foot wide screen in the Belcourt’s parking lot, with the audience receiving the soundtrack through their car’s FM radio. The Belcourt’s building will remain closed to the public, except for restroom use. Concessions will be sold from an outdoor snack bar and will include popcorn, candy, sodas and water. Masks will be required at all times when individuals are not in their vehicles. The Belcourt is also encouraging those attending to purchase takeout meals from Hillsboro Village restaurants.

“The Belcourt Drive-In gives us a fun, safe space to share films — while, of course, helping with some of the revenue we’ve been without for the last six months," Silverman continues. "Though capacity will be limited, our hope is that with multiple screenings each week, plenty of Nashville film fans will have the chance to attend the drive-in. And when it’s safe to do so, we look forward to re-opening the theatre itself for movie-going again too.”

In addition to opening the Belcourt Drive-In in its parking lot, the Belcourt will also continue its virtual offerings, sharing new releases and restorations available to watch at home, as well as opportunities to discuss films and join Q&As online.

Tickets will go on sale first to Belcourt members starting this Tuesday, Aug. 25 at 10 a.m. CDT. If any tickets remain after going on sale to members, non-members can purchase them on Wednesday, Aug. 26 at 10 a.m. Tickets will be $25 per vehicle for Belcourt members and $30 per vehicle for non-members, and all tickets must be purchased in advance. Overall capacity for each screening will be limited to provide safe social distancing in the lot.

From 1968 to 1973, the public television variety show Soul!, guided by the enigmatic producer and host Ellis Haizlip, offered an unfiltered, uncompromising celebration of Black literature, poetry, music and politics at a critical moment in culture whose impact continues to resonate.

A retired San Francisco detective suffering from acrophobia investigates the strange activities of an old friend’s wife, all the while becoming dangerously obsessed with her.

When Pepperland is attacked by the music-hating Blue Meanies, it’s up to John, Paul, George and Ringo to jump on that yellow submarine and save the day.

The NBA is in the news, as is director Gina Prince-Bythewood whose latest film THE OLD GUARD made waves this summer. Alas, we revisit her Y2k debut about two next-door neighbors pursuing their own basketball careers while navigating their burgeoning romance.

Part-rockumentary, part-presidential portrait, this new doc about Jimmy Carter combines new and archival footage with era-defining live performances from the many musicians who supported him, including Aretha Franklin, Paul Simon, Dizzy Gillespie, and Herbie Hancock.

A computer hacker (Keanu Reaves) learns from mysterious rebels about the true nature of his reality and his role in the war against its controllers. Directed by Lana and Lilly Wachowski.

Kelly Reichardt once again trains her perceptive and patient eye on the Pacific Northwest, this time evoking an authentically hardscrabble early 19th century way of life. The Belcourt was to open this film in early April, and we’re happy to give it this proper big screen viewing opportunity.