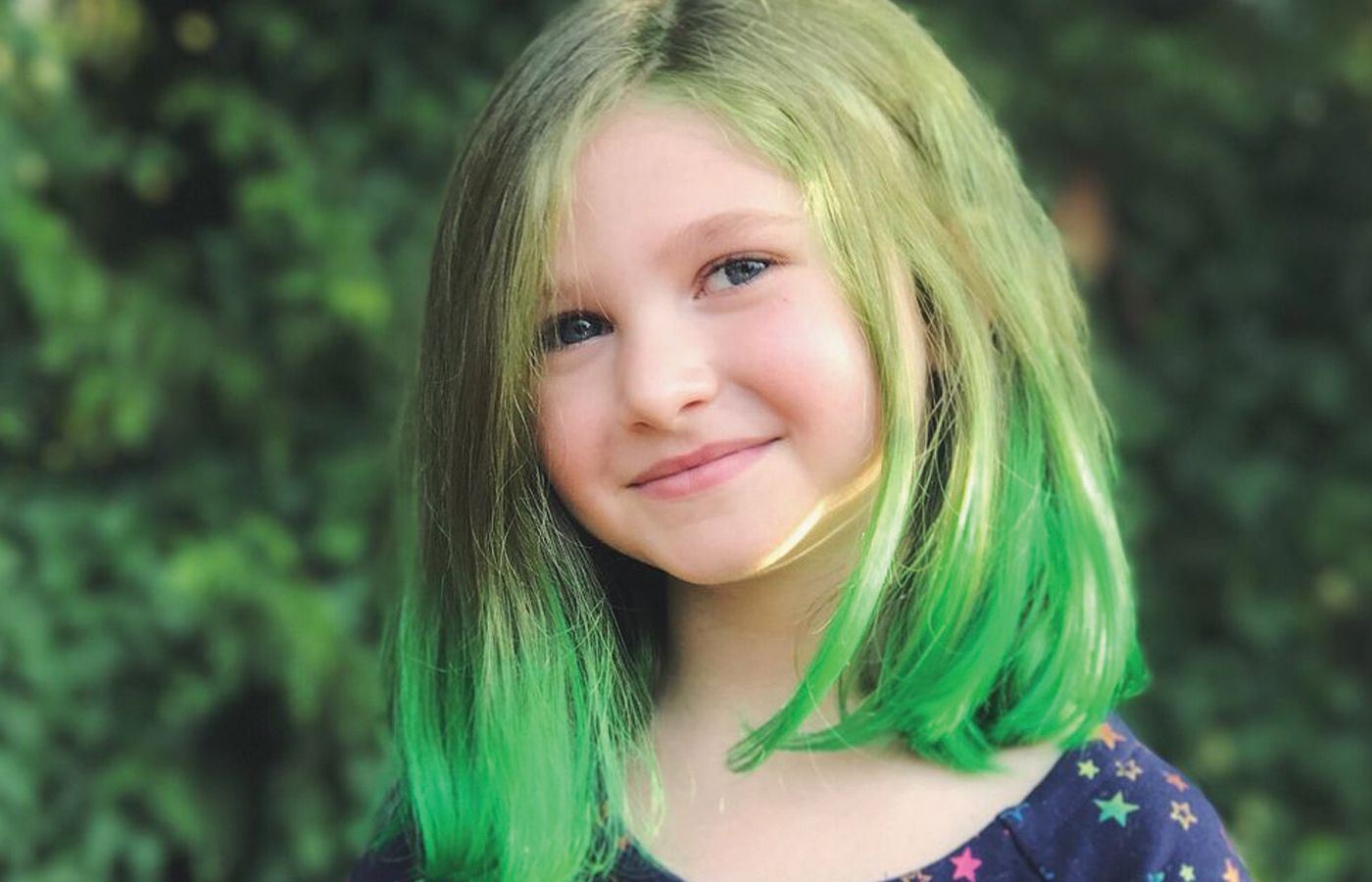 When Jenny Berger was 12 years old she really, really wanted to dye her hair blue, green or even rainbow colors if that was allowed. Her mom Kate wasn’t keen to the idea at all.
“My first reaction was an instant, “Nope,” Kate says. “Although thinking back, I’m not sure why. I think I equated bright hair dye with piercings and tattoos and I just saw it all in my mind and shook my head.”
Kate’s own parents were very cautious with Kate and her siblings when it came to their physical self-expression. But Kate remembers wanting to get her ears pierced at age 13 and being told very firmly that would not happen until she was 16.
“That didn’t set well with me,” Kate admits. “I resented my mom for being so against something I wanted to do that I thought was cool and popular. I realized I didn’t want my own child to have to deal with that.”
So, last summer (when the world was on stay-at-home orders) Kate helped Jenny color her hair with Kool-Aid. It took one packet, a bowl and spoon, conditioner, a paint brush, aluminum foil, a towel and about 30 minutes.
Jenny was thrilled. The Kool-Aid color lasted about three weeks and during that time Jenny got the trend out of her system.
While it’s important not to stifle your kid’s experimentation with different versions of self-expression, it still is shocking if they start listening to music you hate or wearing clothing in a questionable way.
“My son started using scissors to cut off his pant legs and shirt sleeves and it just made my wife nuts,” says Jenson Holder, a Nashville dad of two.
But as long as your kids aren’t hurting themselves or anyone around them, what’s wrong with their actions?
Self-expression helps preteens and teenagers on the road to self discovery figure out who they are becoming and also helps them form their adult personalities.
Fortunately, there are several ways to enable kids to express themselves while also steering them in an alternate (read: acceptable to you) direction. In fact, if you handle each situation tactfully, you can help them discover themselves through appropriate self-expression that’s also OK with you.

Common Issues With Kids and Self-Expression

1) Hair Dye
It is extremely common for kids, preteens and teens to dye their hair unusual colors today and to pick hairstyles that stick out such as a mullet or mohawk. Fortunately, hair will grow back, and it is easy to change colors to more traditional hues. Your best bet is to let your kids get hair coloring out of their systems, says Betsy Brown Braun, author of You’re Not the Boss of Me (William Morrow; 2010).
“I believe children should be able to own their own hair to an extent. I don’t think they should be able to dye it purple any more than I believe a 2-year-old should have an eyebrow piercing, but when we’re controlling about it, it’s not good,” she adds. “Besides, the best lessons that kids learn come by doing the wrong thing.”
If you’re against your kid dying her hair, suggest a temporary hair dye instead, and if you offer to buy it for them, the odds are high that they will decide to use this approach.

2) IFFY Wardrobe Choices
If your kid has started dressing in a way that makes the word odd seem like an understatement, you’re not alone. However, attempting to change her wardrobe by giving her more conservative options or threatening to ground her for her choices will not yield a positive outcome. Consider compromising, then take a look at current fashions together so you can talk about it.
Phyllis Fagel, a counselor and author of the book Middle School Matters (DaCapo; 2019), says as kids get into the preteen years, they have a desire to not seem like a baby. As they transition into adolescence, they can become hostile toward negative adult assessments. Stepping out and making their own choices about what they wear helps them to feel like the expert in their own lives, Fagel says. And that’s the key. It’s best to refrain from judging your child’s clothing choices outloud, if possible, and to meet them in the middle.
For example, allow them to dress how they want to when they are hanging out with their friends on weekends. In exchange, they will wear a more conventional outfit when you have family outings. Alternately, you can enable them to make their own wardrobe choices as long as they pay for their clothing, but also know that if you are a particularly judgy parent, your child may leave the house in one outfit that you approve of only to change into the outfit they really want to wear that they’ve tucked into their backpack.

3) Tattoos and Piercings
The lure of tattoos and unusual piercings can be very strong for teenagers, especially if they are going through a confusing time of change. Keep in mind that most kids will grow out of these stages, so it is a good idea to keep your feelings of dismay to yourself when your child tells you he wants a tattoo, Fagel says.
A Pew Research Center study from 2017 showed that approximately 38 percent of people ages 18 to 29 have at least one tattoo. That number is only larger today with tattoos gone mainstream. But a 2018 U.S. nationally-representative poll on children’s health shows that most parents don’t want tattoos for their teens. Seventy-five percent of parents thought the earliest a kid should be allowed to have a tattoo is at age 18 or older. That doesn’t mean that parents polled were completely anti-tattoo. Nearly 63 percent agreed that getting a tattoo is a form of self-expression similar to hair dying and clothing choices.
If your teenager is talking about getting a tattoo, be sure he watches plenty of episodes of “Tattoo Nightmares,” first, but also take a stand if you need too.
Meanwhile, if your kid wants to get his nose pierced before you’re ready, it is very easy to use a clip- on nose ring instead. As an added bonus, this might help them determine that they do not actually like the way they look.
Ultimately, the best way to help your teenager navigate through their, well, trendier moments of self-expression is to try and be accepting. Keep in mind that the shock factor is part of the fun of dressing oddly and getting a weird haircut. In other words, if you remain calm and offer reasonable alternatives, your kid will feel more comfortable about their choices and happier discussing them with you.

Don't Do These Three Things for Your Kids!

Learn How to Motivate Your Kids Without Yelling