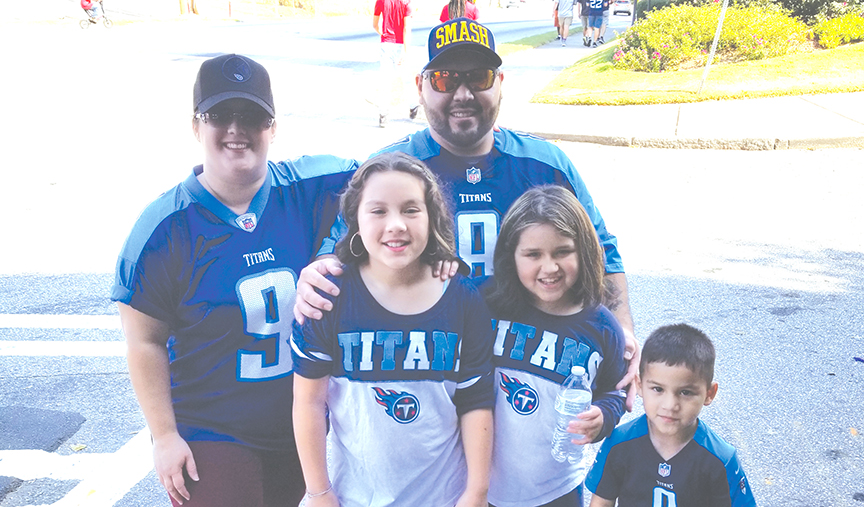 Driving home today blasting Don Henley’s 1989 CD The End Of The Innocence, I had a moment. A revelation really. About these things I never wanted.

I never wanted another Ford. I had a Mercury in 2003. A girl ran a two- way stop sign and threw me into a bird bath then a house. That was replaced by a Thunderbird that was nothing but problems. It didn’t last a few months. My dad chose it for himself really. I had no choice in the matter even though he didn’t pay for my original car. The Mercury. After that I swore them off. Bad luck they were. Or so I thought.

I have a 2005 Ford Expedition. We bought it in January, 2015 with 115,000 miles on it because Orlando was about to arrive and grandma lived with us at the time. We needed a third row, and my Tahoe didn’t have it and couldn’t be converted. I wasn’t pleased. I was one of those “piss on Ford” people.

But this vehicle … this two tone, awful red-colored Ford ushered in a new era for me. Adulthood. It’s been with me in my worst times. Depression and a diagnosis that I fought for more than a year to no avail. The diagnosis anyway. The depression eased because I refused to let it win. The drive. It’s a dream. The hum of the BF Goodrich All-Terrain KO2 tires. The roar of the after-market exhaust. The 20-percent tint that gives me enough privacy to not feel seen. The handling and steering … a dream. I’ve driven brand-new vehicles that don’t come close. Not even a little. In my best times, 47,201 miles later it’s been there for adult Mayme, for basketball practices, for Girl Scout meetings, for new career paths, a third child, new states, new adventures.

I’ve been offered to trade it in. Sell it. I’ve went on two separate occasions. Checked out a Jeep Grand Cherokee and a Kia Telluride. Just took the business cards and told them I’d let them know. I never did. I couldn’t. I pray it makes it another 100,000. Weird, huh?

I never wanted to be married.

I was with my first boyfriend six years. After seeing marriage as a child the 17 years prior, I thought I’d pass. He proposed. I accepted because I didn’t want to hurt him. The ring was perfect. It was made especially for me. There was no reason to reject the proposal. When it came time to plan the wedding, I began planning it with his mother then I walked out on our life. Our home. Our pets. He was a good teammate, kind, considerate, handsome. Everything you could ask for in a human but he wasn’t for me. Afterward, other men proposed to me a few more times. Poor things!

Four years later, I married Silvestre. Then I married him twice. Once at the courthouse on the square. Then two years later at Good Shepherd Catholic Church. He wanted to get married because I was seven months pregnant, or so I thought. I accepted. I knew he loved me. I knew I didn’t want to ever marry anyone else, so I called out of work on a Friday in September 2008. Got married and had the reception at Los Alamos Mexican Restaurant. And we carried on. We’ve had moments. I’ve had moments. I didn’t want him. I didn’t want marriage anymore. Moments I wanted to give up. Moments I never wanted to look at another man as long as I lived.

But this marriage has healed me, brought me to God, killed the careless and could care less in me, destroyed the selfish in me, calmed the wild that coursed through my veins. This marriage has blessed me with three children and one in heaven. This marriage has brought me a relationship with God, Jesus Christ and the Virgin Mary that I don’t know how I functioned without the 21 years prior. I can’t tell you how much this means to me except to tell you as I write it tears fall.

A little boy who came from Mexico into California when he was 2, surviving on Jumex, and a mother’s determination and love saved me. He asked me to church, he set himself to the task of understanding me as best he knew how, he was patient with me while we fought my demons, he was forgiving and patient while I worked through this constrict I thought was marriage. No one else could have brought me through. I’ll never be able to show him enough love and gratitude for his perseverance. Weird, huh?

I never wanted children. If I did, I said I’d reconsider at 32. See where I was in life. I’m 34 this July. I’ve been pregnant four times by the same man.

I never wanted female children. I was the oldest of six girls from blended families. One full blooded. One half. And three steps. I consider them all my full sisters. I don’t play that. I love them all. That being said I was sure that I’d had enough of girl babies though. I wanted a boy baby. One boy. I lost my first child at seven weeks and three days. Not being able to grow the way I needed and cope with life caused that. So I was sure this was a sign. That I was right to begin with. I don’t want children. Ever. I’ll just be a mother to those children who I may come in contact with.

I had two girls. Two years and two months apart. I gave up. I was done. I put in a 10 year IUD. Four years later on a whim, maybe loved ones who’ve gone before me whispered in my ear to, “Try Now”. I did later that day. Ten months later I had Orlando. That soul was delivered to me because I listened to a whisper on the wind. I trusted my instincts. I worked through a marriage that could have ended. Blood, sweat, tears, counseling. I carried on. Otherwise he wouldn’t exist. His warm small child body is pressed between my legs as I write this. We’re watching Paw Patrol. Well he is. I’m smiling and nodding. He loves to dance, sing and tell jokes. He’s my gift for not giving up. Him and his father both. Avi helped me to think about others. She’s my gift of selflessness. Her and her father both. Laura was my miracle. My proof that I was and could be a mother. That I loved every moment of it. That I hung on her every breath. Her and her father both. Weird, huh?

I never wanted to work at a bank. I almost turned around when I was driving to the interview. When I saw the building come into sight, I became so nervous. I never get nervous. I’m fearless. But I thought I was in over my head. I came from a law office. Before that, a receptionist at a ladies’ gym. Then the 10 years prior factory work. But I pep talked myself in the parking lot. “Mayme you can do this. You can do anything.” I got the job. A teller position. Then a promotion after 7 months. I open accounts now among other things. I’m up for another promotion now. A traveling loan officer. I find out soon who they’ve chosen.

This has been the place I have looked for my whole life. The company takes care of you if take care of them. Great benefits. Good pay. Great management. The same values as me. I regret the decade I spent doing other work. I wish I would have found it sooner, but that’s fine. I have it now. I almost turned around the morning of the interview. Now I plan to retire there. I’m not going anywhere. Weird, huh?

So because I had an early day at work, the sun was shining, it was beautiful out, my vehicle was feeling like something someone would pay $80,000 for today, I thought of each one of these things in this exact order for the 30 minute drive home.

Because these things I never wanted became everything to me!

SUBMIT YOUR STORY! Write what you want to tell about yourself and your life — no matter what — in the body of an email. Include a photograph and send it to Noah Day at noah@daycommedia.com. Anyone is welcomed to submit YOUR STORY at ANY TIME. You will be automatically entered into our ongoing prize drawings. The next prize drawing will be on Nov. 23, 2019. The winner will be notified via email.