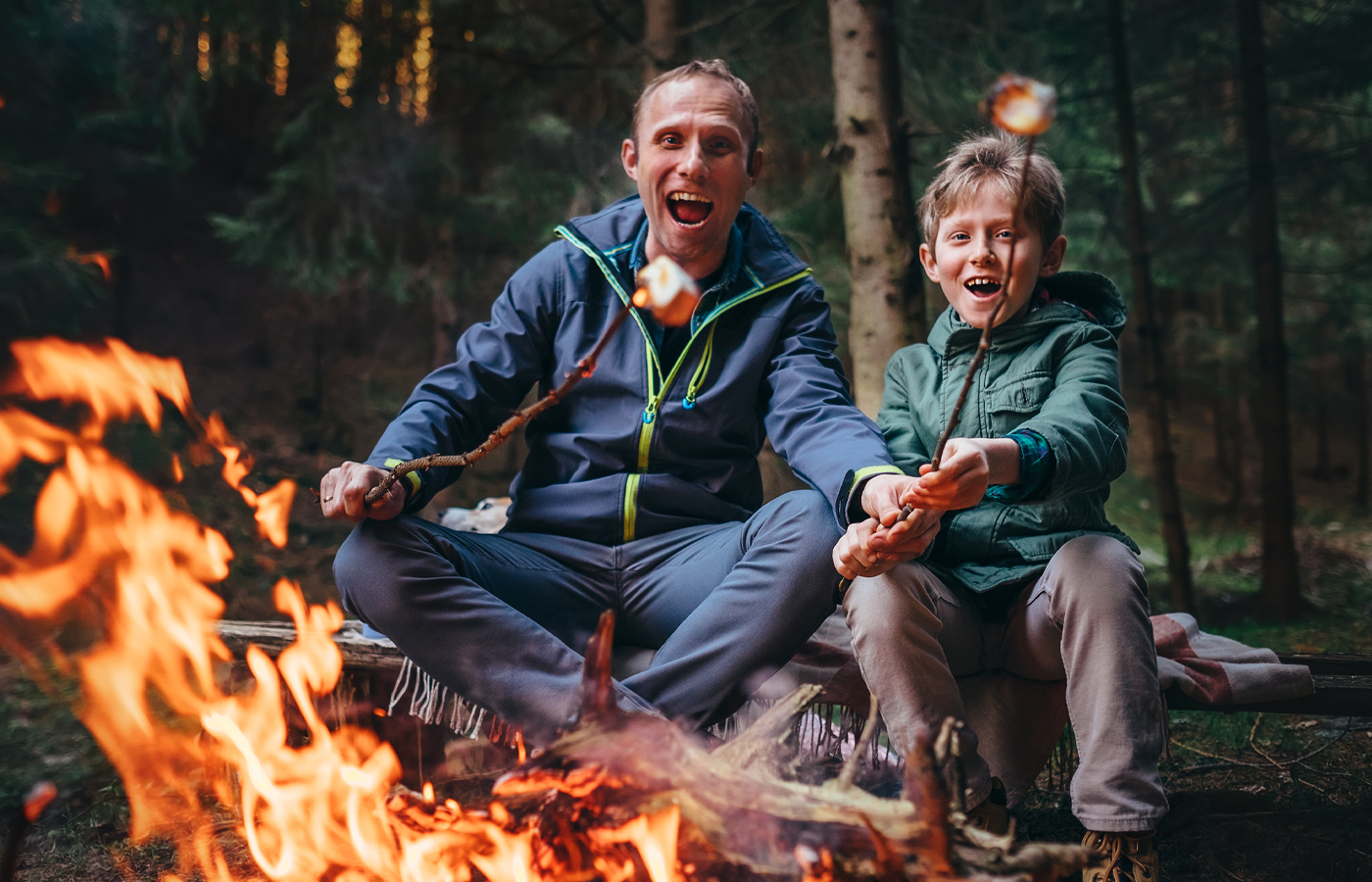 There are also a variety of interactive campsite games your family can enjoy:

Just how many times can you roast a crust around a marshmallow on a stick? Start with a fresh marshmallow, and as soon as it gets crusty, pull of the crust and eat it (a tasty treat), then return the marshmallow to the flames, and keep repeating the process until there is no marshmallow left. The winner is the person who winds up with the most times from the same marshmallow.

Give each player a sheet of dot stickers preferably red, like mosquito bites. As the evening progress, try to get rid of your stickers by giving the others players “mosquito bites." Do this by secretly placing stickers on other players. But beware! If you get caught, you have to keep your sticker and receive another one from the person who caught you. The first player to get rid of his sheet of stickers wins the game.

Place chocolate squares for your s'mores into a small paper bag. Write a command on the outside of the bag, like “hop on one foot.” Place that bag inside another bag, on which another silly command is written. Continue placing bags inside of bags (all with silly commands on them) until you have at least one for each player.

Place the collection of bags inside a backpack. Set the graham crackers and marshmallows out, but inform campers that in order to retrieve the chocolate, they must complete the backpack game. Have everyone sit around the campfire and begin passing the backpack as you play music. When you stop the music, the player holding the bag must open the first bag, stand up and perform the task. Continue playing in this manner until everyone has performed a command and the bag containing the chocolate is revealed.

This is a fun nighttime game once darkness falls. Give the tagger a flashlight and play tag as you normally would, except the tagger uses the light of the flashlight to “tag” people. Once a player is “hit” with the light he is out. Play continues until everyone has been caught.

Each player gets five glow stick rings — glow necklaces or bracelets work well. Dig and secure a stick in the dirt so it's sticking up out of the ground. Take turns tossing the glow stick rings, aiming to get them over the stick.

This is a fun game for hot days in the woods. Give each player a drinking cup (Solo Cups work well). Have the players stand in line, single flie. The person at the front of the line will have his cup full of water — all other players in line have empty cups. Without turning around and looking, the first person in line dumps the water out of his cup over his head into the next person's cup. The player behind him tries to catch as much water as he can. Game play continues down the line untilt he final person in light was caught the water in his cup (if there's any left, that is). Then the last player in line moves to the front of the line to start over with a full cup of water.

MORE FAMILY FUN AT THE CAMPSITE

Bring along books for your kids and encourage reading by flashlight!

Camping’s natural, outdoor environment is a prime setting for a scavenger hunt. Make a list of items that will be easy for little ones to find, and bring small prizes. Love the Outdoors (lovetheoutdoors.com) has lots of great scavenger hunt lists for camping families.

Also try an alphabet hike. Look for items that begin with each letter of the alphabet, going in order from A to Z.