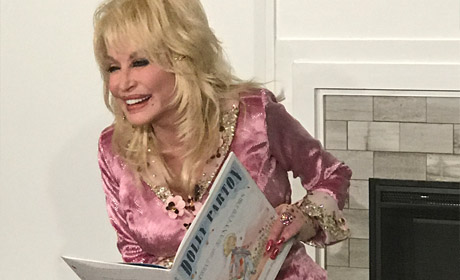 At a press conference on Tuesday, Aug. 15 with several kids in attendance, the one and only Dolly Parton made a special announcement, a first in the superstar country legend’s illustrious 50-year career.

This fall, Dolly will release her very first children’s album. Titled I Believe in You, the project includes 13 songs all written by Dolly. It will be available digitally on Friday, Sept. 29. The CD drops on Friday, Oct. 13.

“I write kids’ songs all the time, but I’ve never put them on a public album,” Dolly quips while introducing the project. “I figure now’s the time, because I’m getting so old I’m entering my second childhood,” the 71-year-old icon laughs while adding she enjoys being a little more playful when writing songs for kids. She says she hangs out in the playhouses she keeps for nieces and nephews while writing in order to capture the spirit of being a kid again.

Dolly says all the songs on I Believe in You are meant to uplift kids, and the inspiration came from books that are a part of her Imagination Library. Dolly started Imagination Library in 1997 to promote childhood literacy in her hometown of Sevierville, Tenn. She launched the program in honor of her father who could not read. The free program sends a book a month to children from the time they’re born to their fifth birthday.

During the past two decades, Imagination Library has grown to include many states in the U.S. It’s also available in Canada, Australia and the United Kingdom through a partnership with Random House. To date, more than 100 million books have been given to more than 1 million children. Every child’s first book is the classic Little Engine That Could.

Proceeds from sales of I Believe in You will support Imagination Library.

“My first album was released 50 years ago, and it’s been an amazing 50 years since then. I am very excited that now I’m coming out with my first children’s album in all of those 50 years. I’m proudest of all that the proceeds from this CD will go to the Imagination Library,” Dolly says. “It’s been 20 years since the Imagination Library was launched. We’ve seen 100 million books get into the hands of children and hopefully there will be many more.”

In keeping with her enormous spirit of philanthropy and giving back, Dolly continues, “When you’re in the position to help, you should if you can. I’m as proud of the Imagination Library as anything I’ve done.”

I BELIEVE IN YOU TRACK LISTING

Pictured above: Dolly Parton reads her children’s book, Coat of Many Colors, to kids during her Aug. 15 press conference.