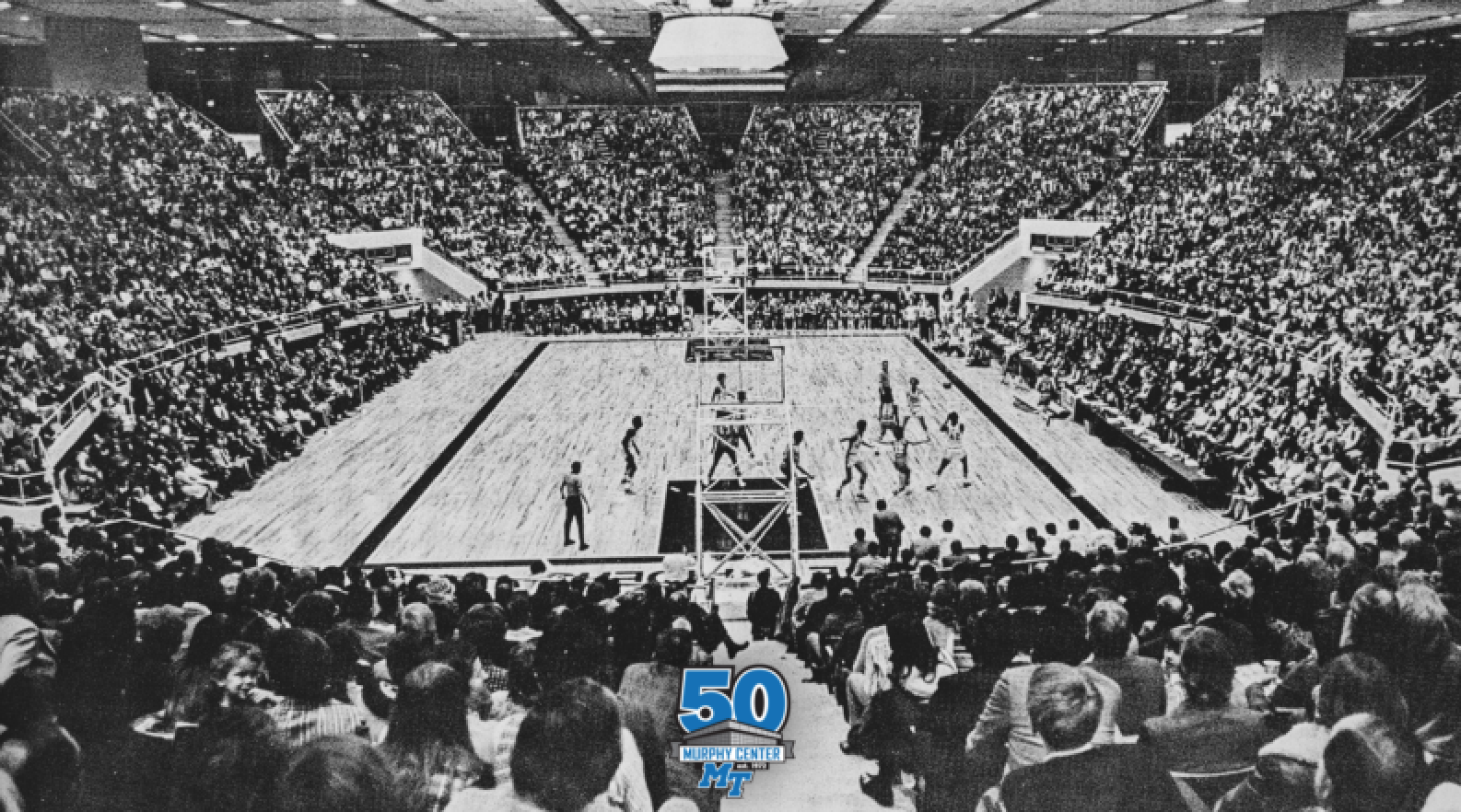 Middle Tennessee Athletics invites you to join Middle Tennessee State University for a celebration of 50 years in the Murphy Center on Thursday, December 15, when the Blue Raiders take on in-state foe Chattanooga at 6 p.m.

Fans will be treated to Replica Floor Rally Towels, 50th Anniversary Buttons, and a limited number of commemorative game tickets and souvenir programs, while the Blue Raiders will don throwback uniforms and warmups harking back to styles worn by the 1972-73 Blue Raiders that debuted the Murphy Center that season. Music throughout the night will focus on the various acts that have performed live in concert in the Glass House.

Members of both the MTSU and Vanderbilt men’s basketball teams that competed in the Murphy Center’s first ever game on December 11, 1972, will be honored, with four of the five starters for the Blue Raiders on that day accompanying that night’s starting five during lineup introductions. The 1972-73 team will also be wearing blue shirts during the game, while members of the Vanderbilt team MTSU played on opening night will also be in matching shirts.

Throughout the first half, individuals essential to the Glass House’s history will be honored, including the late Bubber Murphy, represented by his two sons, the Murphy Center’s namesake; Bill Smotherman, Charlie Pigg, Harold Smith and Jim Simpson, who all helped open the doors for that Vanderbilt game five decades ago; and the late Monte Hale, represented by his son Monte Hale, Jr., and Coach Jimmy Earle, who the arena is named after.

Halftime will honor every member of the 1972-1973 MTSU and Vanderbilt men’s basketball teams, as well as their coaches and support staff in attendance. Fans will also see a sneak peak of “Inside the Glass House”, a documentary on the Murphy Center’s 50th anniversary that will debut after the game’s conclusion later that evening.

The second half will feature highlights of the MTSU track program, including the plethora of athletes who have run on the Murphy Center track over the decades. Sage Glass, the company whose automated tinting glass was installed during the Murphy Center’s Glass Replacement project this summer, will also be recognized, followed by the latest updates on the Build Blue project.

And make sure to stay in your seats following the conclusion of the game, where “Inside the Glass House” will debut on the big screens for all to reminisce and enjoy!

Tickets are still available at a retro throwback price of just $4 (no promo code needed) in Sections A, J, K, and T at this link.