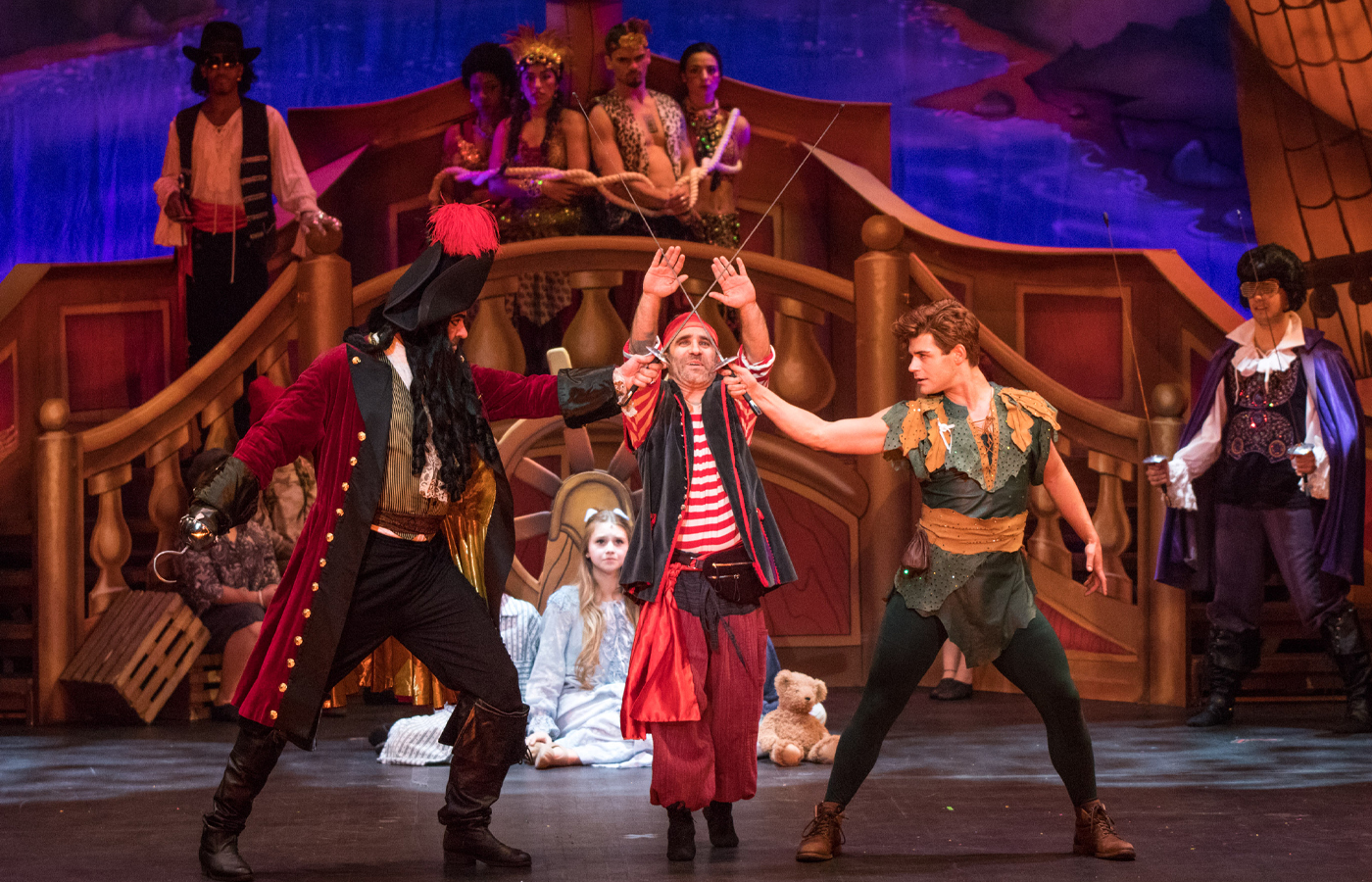 Nashville has no shortage of holiday shows to entertain your family this season, many of which have become beloved traditions. It's always fun when something new and exciting enters the mix. This year, TPAC teamed up with Lythgoe Family Panto to present Peter Pan and Tinker Bell: A Pirate's Christmas.

In case the Lythgoe name sounds familiar, here's why: the family's production company is the brainchild behind hit TV shows including American Idol and So You Think You Can Dance. During the past several years, the Lythgoes have brought panto theater to American audiences with the goal of creating memorable experiences families can share together.

A FUN, MEMORABLE EXPERIENCE FOR THE WHOLE FAMILY

The Lythgoes have hit it out of the park with Peter Pan and Tinker Bell: A Pirate's Christmas. It's one of the best family shows to grace the stage. Now that the show is running, it is THE hot ticket in town for kids of all ages. The dazzling, high-energy, interactive production engages kids in a unique way for the entire two-hour journey into Neverland. It's equally entertaining for the adult, crowd, too, with or without little ones in tow.

American panto productions tell fairytale stories with familiar pop music. Audience participation is a big part of the experience, too. The kids on opening night LOVED the characters talking to them from the stage. They loved getting to shout, make noise and interact through the night, becoming an important part of the show themselves. From booing Captain Hook to cheering loudly to bring Tinker Bell back to life, the show brilliantly provides energizing involvement for kids.

Written by Kris Lythgoe, this Peter Pan tale cleverly combines familiar elements of the traditional story with an original twist infusing a holiday theme. In short, Hook's bumbling pirates plot to kidnap Peter as a Christmas gift to their dastardly leader.

Lythgoe infuses a lot of local references into the show, including the pirates' initial stage entrance by way of a Nashville Pedal Tavern rigged with tricycles. It comes complete with a bride-to-be from Chicago, a funny nod to the Woo Girls that Nashvillians love to hate. Several other mentions include Nashville hot chicken, the Grand Ole Opry, Centennial Park and more.

Witty puns are woven throughout the show, with most of their delivery courtesy of Smee (the wildly hysterical Ben Giroux).

One of the most comical aspects of the production is thanks to the three pirates representing major music legends — John Lennon (Mason Trueblood), Elvis Presley (Dan Castiglione) and Michael Jackson (Malcolm Buchanan). The three talented men perfectly capture the traits of their pop icon counterparts. The sequin glove-donning Buchanan delivers the King of Pop's signature moves and Castiglione's Elvis mumble is perfect for confusing Captain Hook. Trueblood's deft delivery of Pirate Lennon is a favorite as his dialogue is strictly song titles or lines from popular Beatles tunes.

The inclusion of several well-known pop tunes is a fun, magnificent stroke, and they all cleverly work within the framework of the story. Favorites include "Uptown Funk" (Bruno Mars), "In the Navy" (Village People), "Hooked on a Feeling" (Blue Swede) and "Think" (Aretha Franklin).

Fifteen-year-old Tegan Marie — the youngest female artist to sign to a major country (Warner Music Nashville) at age 13 — plays Wendy. Furthermore, she gets to sing one of her self-penned songs in the show, "I Know How to Make a Boy Cry."

John O'Hurley (center) as Captain Hook with his band of pirates.

American Idol alum/Broadway-blessed (and Nashville resident) Diana DeGarmo gives a pixie-perfect portrayal of Tinker Bell. It's fun to experience a real-live version of Tink versus only a light and chime effect. DeGarmo infuses a succinct mix of whimsy and sass that's a big hit with the audience in tandem with her dynamic vocal talent.

Disney Channel star Garrett Clayton gives Peter Pan a wonderful amount of youthful energy. A capable singer, Clayton charms the audience, and it's magical to watch him fly through the air.

The aforementioned Marie is a standout talent in the show. At 14, she's a mighty vocal force to be reckoned with and the undeniable crowd-pleaser. Her three unforgettable solo numbers — "I Know How to Make a Boy Cry," "Don't Let Me Down" and "There You'll Be" — garner the biggest cheers from the audience.

In addition to DeGarmo, all of the kids playing Lost Boys are from the Nashville area. They bring a lot of fantastic charm to the show. In addition, it's a wonderful effort for the production to inspire youngsters by giving them an opportunity to experience the spotlight.

If you have a child who's yet to encounter a live theater experience, Peter Pan and Tinker Bell: A Pirate's Christmas is that perfect introductory opportunity.

From Peter taking flight and a couple of hefty snowfalls in the audience to vibrant set design and all of the audience interaction with beloved characters, it's a magical treat your family will never forget.

Here's hoping that Peter Pan and Tinker Bell: A Pirate's Christmas becomes Nashville's newest holiday tradition to return next season for all to enjoy!

All photos by Derrick Minyard.