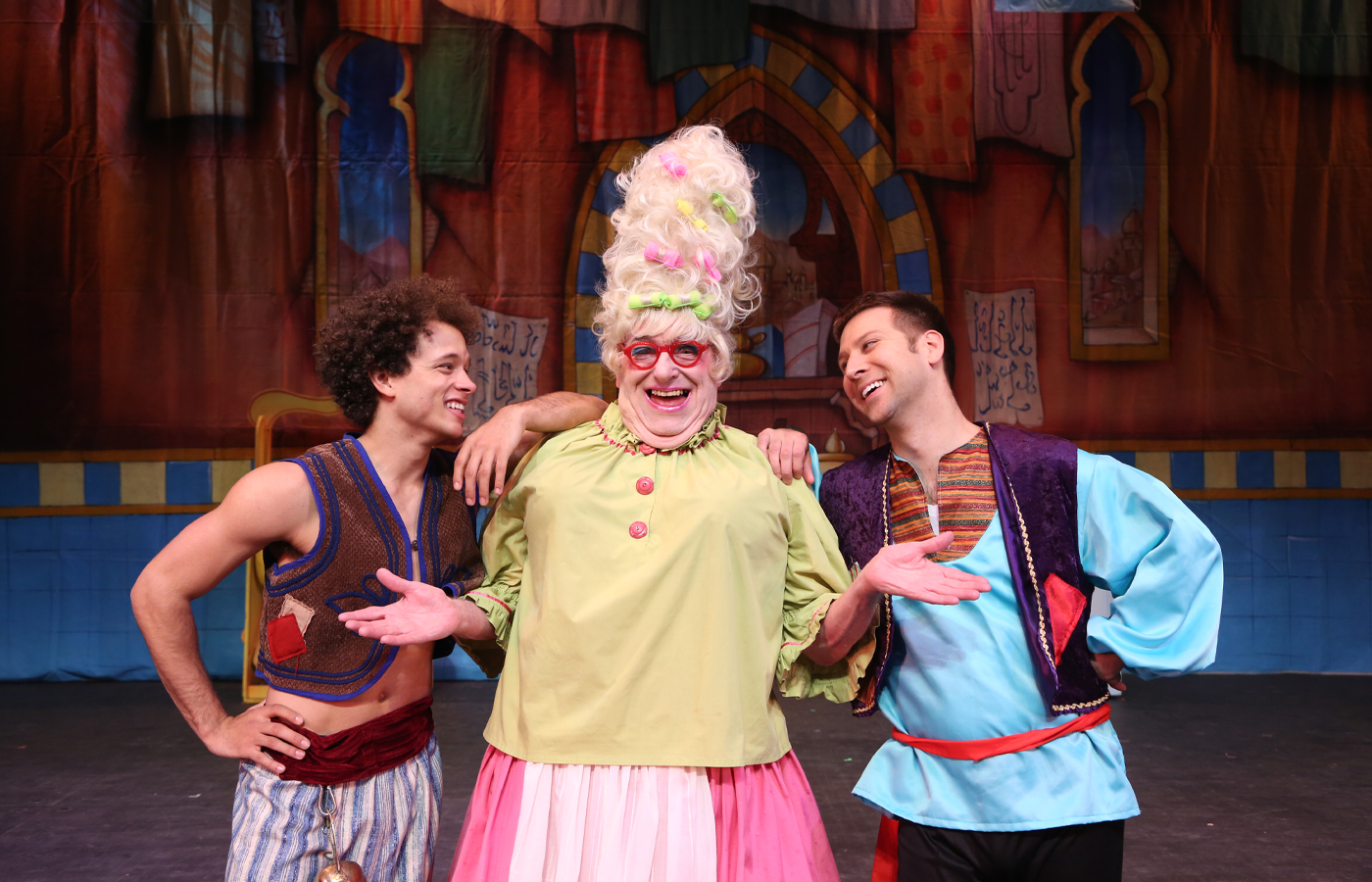 If you've been looking for something to bring extra magic into your family's holiday season, look no further than Aladdin and His Winter Wish. It's a spectacular panto production that's a joint effort between Lythgoe Family Panto and TPAC with Ernie Nolan (executive artistic director at Nashville Children's Theatre) serving as the show's director.

In case you're not familiar with a panto production, it takes a classic fairytale and rewrites it with a modern twist, interweaving contemporary pop music into the show. Another panto tradition is the inclusion of celebrity guest stars.

Expect a lot of fun audience interaction, because in a panto production, the audience is an important member of the cast by way of booing the bad guys, cheering for the good guys and interacting in other ways throughout the show. Meza, as Aladdin's "younger and useless brother" Wishee Washee, plays with the audience a lot, and his improv skills are superb when he's interacting with the Golden Token-wielding kids onstage.

In this particular Aladdin tale, the title character is a street rat who's small in riches but big in dreams. He falls for the Princess at first sight and his wish is to marry her and to see it snow in the desert. And while the Sultan insists his daughter, the Princess, can only marry a prince, she rails against an arranged marriage and vows to marry someone she loves.

Of course, any decent fairytale isn't complete without the token villain. Adamson's dastardly Abanazar is deliciously evil as he weaves webs of deception in an attempt to get his hands on Genie's lamp and have some magic done that will result in him marrying the Princess … and, therefore, getting his hands on all her riches.

The musical numbers are a big part of the experience, and it's amazing how the show's writer, Kris Lythgoe, finds the perfect songs to weave into the storyline. Adamson's delivery of Coldplay's "Viva La Vida" is memorable, especially with the nod to Elphaba's final high-flying "Defying Gravity" belting moment from Wicked.

Other standout musical moments include Gillespie and Meza's performance of Matthew Wilder's "Break My Stride" (and the immense physicality of their dance moves that come with it!), Kosarin's "The Way" (Ariana Grande), Vilanch's hilarious rendition of Bob Seger's "Old Time Rock and Roll," and Gillespie and Kilgore's stunning performance of Bruno Mars' "Billionaire."

When it comes to the vocal chops in this production, Kilgore shines brightest. His dynamic range and control is fierce, and he provides the most spectacular musical moment in the show at the end of Act I with his flawless performance of Earth, Wind and Fire's "Fantasy."

There's a ton of comedy in the show, including localized jokes about Clarksville, The Gulch, Franklin, Brentwood, 440 being a nightmare for eons, Hattie B's, Vanderbilt, the Ingram Family and a particular stab at Memphis — it's all in good fun, and it's all hysterical. One of the things so wonderful about the humor in the show is that there's plenty to amuse kids while there's also a lot for the adults in the audience — like Karn's Sultan making Home Improvement and Family Feud references, Kilgore's "Black Genies Matter" statement, the presence of Alexa (yes, the Amazon one) or the divine campiness of Vilanch's entire performance as Aladdin's mom and laundry mat owner, Widow Twankey. Vilanch is an absolute riot with expert comedic timing (which comes as no surpise given his long career as a comedy writer).

And let's not forget about the magic! From a floating carpet ride to it snowing in the audience, there's much to merit the squeals of delight heard all over Polk Theater last Friday night, from both kids and adults!

Aladdin and His Winter Wish is Director Ernie Nolan's first foray into the panto world, and the result is a flawless family-friendly production that's overflowing with fun and holiday cheer. It's truly heartwarming to experience the collective joy that this show delivers to its audience.