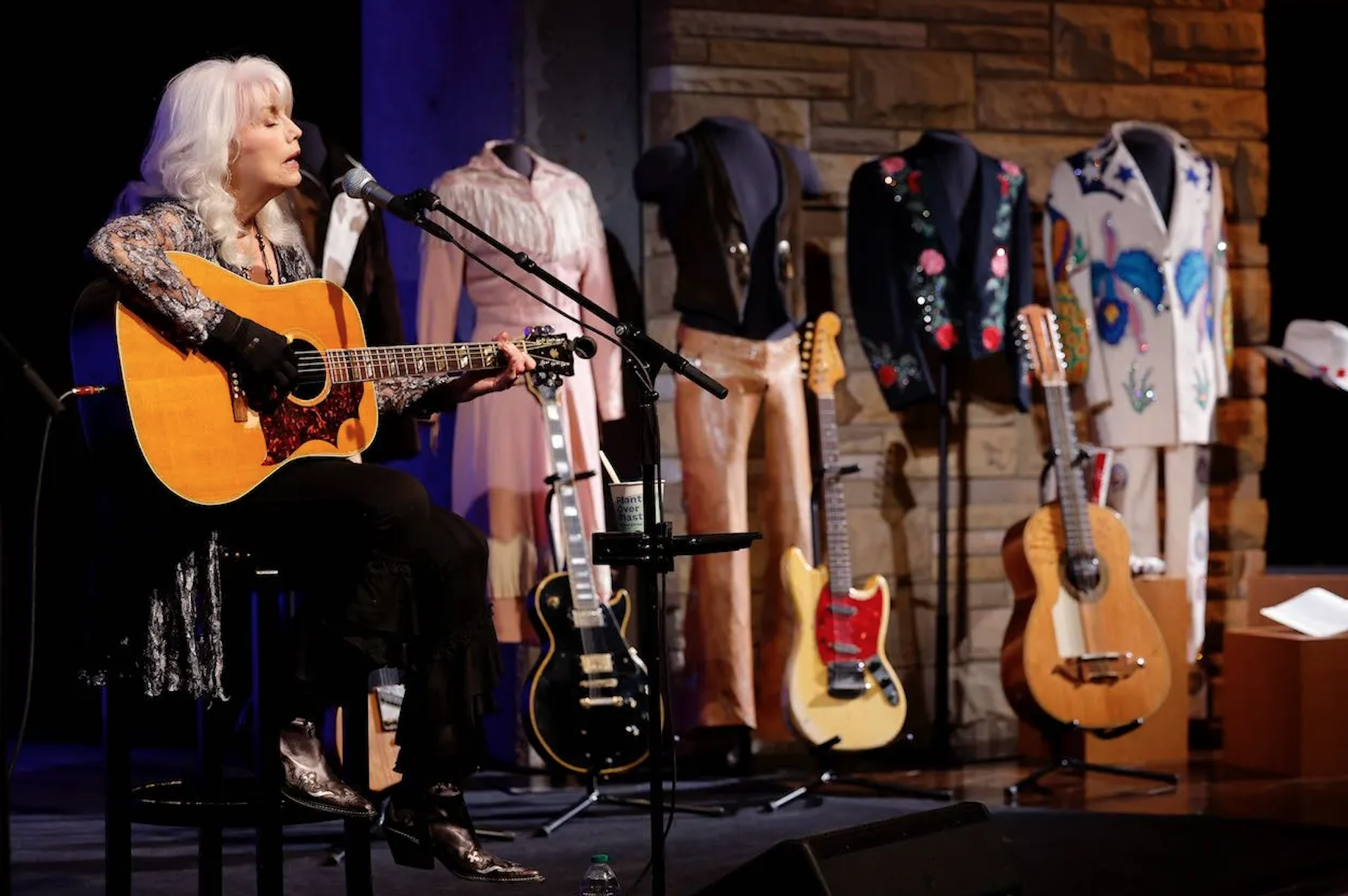 The Country Music Hall of Fame and Museum is set to open its next major exhibition, Western Edge: The Roots and Reverberations of Los Angeles Country-Rock on Friday, Sept. 30 for a nearly three-year run.

Western Edge will trace the Los Angeles-based communities of visionary singers, songwriters and musicians who, between the 1960s and 1980s, frequented local nightclubs, embraced country music, created and shaped the musical fusion “country-rock” and, ultimately, made a lasting impact on popular music.

The exhibit surveys the rise of the Byrds, Buffalo Springfield, Eagles, Emmylou Harris, Linda Ronstadt and others who found commercial success with a hybrid of rock sensibilities and country instrumentation and harmonies. These trailblazers’ musical contributions were expanded upon by the next generation of L.A. roots music performers — the Blasters, Los Lobos, Lone Justice, Dwight Yoakam and more — who once again looked to traditional American music for inspiration, blending hard-edged honky-tonk, Mexican folk music, rockabilly and punk rock. These artists — along with their country-rock predecessors — provided inspiration to future generations of country and Americana artists.

“Western Edge examines a time of boundary crossing and great communal creativity,” said Kyle Young, chief executive officer of the Country Music Hall of Fame and Museum. “This adventurous synthesis of traditional and contemporary sounds not only fueled creativity for generations of L.A. musicians, but grew into an American phenomenon that still reverberates in music today. Along with the exhibition, we are offering an official playlist, a companion book, special concerts and public programs which will be scheduled throughout the run. Through these multiple avenues we look forward to sharing the rich and multi-layered story of country-rock’s enduring impact.”

The museum’s curatorial and creative teams conducted more than 40 hours of filmed interviews and collected an array of significant artifacts for display in Western Edge, which will be housed in a newly designed 5,000 square foot gallery space.

An introductory film narrated by multiple Grammy Award-winning artist Dwight Yoakam, a key figure in the exhibit’s story, will be presented inside the gallery, along with stage wear, instruments, original song manuscripts and more. Interactive elements will allow visitors to explore the connections between artists who made up these musical communities through audio recordings, performance clips, original interview footage and historical photographs.

Some Western Edge artifacts include:

The playlist is categorized into three eras, representing the breadth and depth of the movement. Songs from a variety of artists are included, from country-rock pioneers the Byrds, Buffalo Springfield, the Dillards, International Submarine Band, Taj Mahal and more, to artists who solidified the movement and took it to new heights, including Jackson Browne, Crosby, Stills, Nash & Young, Eagles, Flying Burrito Brothers, Emmylou Harris, Michael Nesmith & the First National Band, Nitty Gritty Dirt Band, Linda Ronstadt and Neil Young, among others.

The playlist is rounded out by the next wave of influential roots-inspired L.A. artists, including the Blasters, Desert Rose Band, the Knitters, Lone Justice, Los Lobos, Maria McKee, Rank and File, Lucinda Williams, Dwight Yoakam and more.

An illustrated and in-depth exhibit companion book will supplement the gallery presentation, with a foreword by Linda Ronstadt and a main essay by longtime Los Angeles music journalist Randy Lewis. 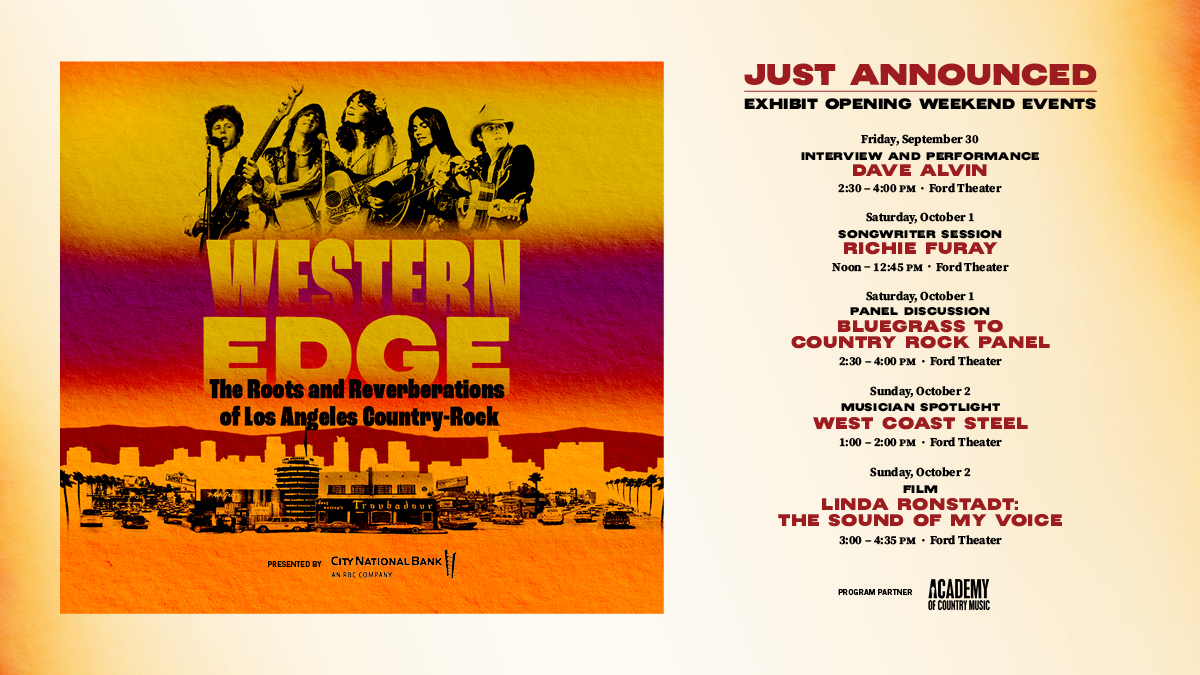 In support of the exhibit’s debut, the museum will host two opening weekend concerts, including the reunion and final performance of the Desert Rose Band, as well as a host of newly added discussions and performances. The concerts and programs are made possible in part by the Academy of Country Music and exhibit travel partner American Airlines. Family programs will also be offered in the Taylor Swift Education Center.

To purchase admission to opening weekend programming, visit the museum’s website here. Tickets for the CMA Theater concerts are on-sale now with a limited number still available. All other programs in the Ford Theater and Taylor Swift Education Center are included with museum admission and can be reserved this Friday, Aug. 26, beginning at noon Central. Read the full slate of festivities below:

For more information on the Western Edge exhibit and its supporting programs and elements, visit the exhibit landing page on the museum’s website.