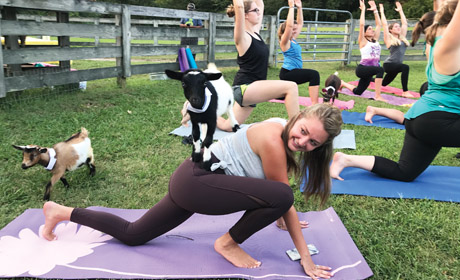 Breathe in … bleat out! Goat yoga is sweeping the nation and taking over the local fitness scene! A mix of meditation, yoga postures/breathing and baby/miniature goat interaction, the festive craze is becoming the talk of the town.

Goat yoga got its start in Albany, Ore., in 2016 on Lainey Morse’s farm. When she was diagnosed with an illness in the midst of a divorce, she found comfort in hanging out with the 10 goats on her farm.

Soon thereafter, Morse began hosting “goat happy hour” sessions for people who were under a lot of stress or were sick. “The goats would help people forget about everything,” Morse says.

When an fitness instructor friend suggested doing yoga sessions with the friendly, sociable critters, Morse immediately stated the goats would be “all over everyone.” The instructor thought that was a great idea, and goat yoga was born.

Within a few short months, Morse had a 1,200-person waiting list to attend the goat yoga sessions at her farm.

Now, goat yoga’s a big trend across the country, including here in the Greater Nashville area!

Currently, there are six places in Middle Tennessee offering goat yoga. Nestled on a farm in Brentwood, we gave it a whirl at Goat Yoga Nashville and had a blast.

Goat Yoga Nashville began this past June, and owner Melody Nash first thought it was just a novelty. It wasn’t long, she says, before she realized the impact of people interacting with animals in this way.

“We have a lot of women, like doctors and lawyers, with high-stress jobs who come out regularly,” says Nash, adding it’s also popular among moms looking for a fun and unique girls’ night out experience. Families are welcome, too, and it’s common to see a few kids and dads in the mix.

Goat Yoga Nashville has 11 neutered male Nigerian dwarf goats that participate. “They were obtained specifically for this and are all bottle-fed babies, which makes them even more social,” says Nash.

Before the actual hour-long yoga session begins, the goat parade takes place as Nash beckons the critters with pop music favorites from a boom box. The happy, excitable little creatures make their way from the barn up to a large, fenced-in spot in the meadow below where yogis await.

Bring your own mat and bottled water (there are a few loaner mats available, free of charge), and be ready for a legitimate yoga session.

Mia Diaz Kostic, an instructor of 10 years specializing in vinyasa flow yoga (she’s the owner and principal of MDK Fitness), leads the one-hour sessions. All ages and experience levels can participate in this easy-going atmosphere. With the clean, friendly goats mingling about, there’s an emphasis on mindfulness.

Want to stop to take a selfie with a goat? No problem. Feel laughter about to erupt when a goat hops on your back? Let it out! Just want to sit there and play with the goats? Go for it.

Kostic’s taught a lot of classes during the past decade, including 5 a.m. boot camp sessions for U.S. Army members. Talking about goat yoga brings a bigger glow to her already bright aura. “This is the most joyful class I’ve ever taught,” she says.

JUST GOAT WITH IT

Once the goats are in the enclosure, there’s a few minutes of socializing with them, petting them and feeding them treats. As Kostic takes attendees through the yoga session, Nash and her husband help guide the goats to each person for additional interaction and photo ops.

“Goats like to be high, so hopping on people’s backs during certain yoga poses is natural for them,” says Nash.

It doesn’t hurt, and the goats aren’t heavy. The experience certainly helps you stay present when you’re doing a downward-facing dog pose with a goat on your back! Sometimes you can’t help but just laugh, and sometimes, that’s exactly what you need to experience in that moment.

Yes, there is a chance a goat might poop or pee on you and/or your mat. Goat poop is like that of a rabbit’s, hard pellets. Nash keeps plenty of supplies on hand to clean and disinfect everything as needed.

Local Goat Yoga Offerings for You and Your Family

All photos taken by Chad Young at Goat Yoga Nashville in Brentwood.