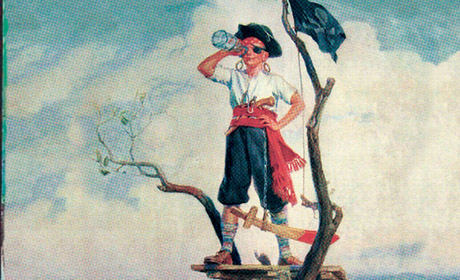 For years, Tom Mason and the Blue Buccaneers have sailed across the globe entertaining audiences with their pirate-themed songs and sea shanties. They're a big hit at festivals near and far, and in recent years they've been in demand on children's stages, including the Pilgrimage Festival in Franklin.

It only made sense for Mason and his crew to make an album for their pint-sized pirate fans. Lads and lasses will love the swashbuckling musical adventure of If You Want to Be a Pirate: Songs for Young Buccaneers. It's a Grammy-worthy project boasting 10 catchy songs that tap into all the humor, harmonies, stories and pirate mayhem without the rum, murder and sorrow that often surface in the band's adult-centric pirate tunes. The album is musically sophisticated — it doesn't sound like a sappy, watered-down kids' record as many children's albums do. Kids appreciate authenic music, and they get the real deal with Mason. What's also phenomenal about this CD is Mom and Dad will enjoy it, too. With toe-tappin' melodies and clever lyrics found in tunes like "Kristofer the Kindly Kraken," "In the Drink" and "Talk Like a Pirate," you'll find yourself singing along with the kids! The album also includes a couple of numbers speaking to the necessity of caring for the sea and the environment. If You Want to Be a Pirate: Songs for Young Buccaneers is one of the best children's albums to ever hit the market. It's one everyone your whole family will enjoy. It's available for $15 at tommason.net.

There's a lot of free fun on tap during Fall Kids Fest. Rutherford Parent's outdoor festival features several local vendors, food and fun activities. Kids can bounce on inflatables, scale a climbing wall, take a spin on a mechanical bull, trick-or-treat around the event and pick out a free pumpkin (while supplies last). New this year! There's a Baby Costume Parade at 10:30 a.m. for ages 6 months – 2 years followed by a Kid Costume Parade at 11:15 a.m. for ages 3 – 10 years. We'll be giving away several prizes during the parades for both age groups. We're giving away some of the hottest new toys for babies. Older kids have a chance to win local attraction tickets and the grand prize for them is a one-year family membership to Nashville Zoo. Costumed kids participating in the parades can pick up a free prize drawing ticket at Rutherford Parent's booth next to the stage. Prizes drawings will take place after each parade. We'll also be giving away vendor door prizes throughout the day, including everything from gift cards to an autographed Ryan Johansen hockey stick! There will be food trucks on site, too, with fare ranging from hot dogs, pizza and ice cream to Tropical Blast and Smoothie King.

1:30 p.m. Center for the Arts Performance