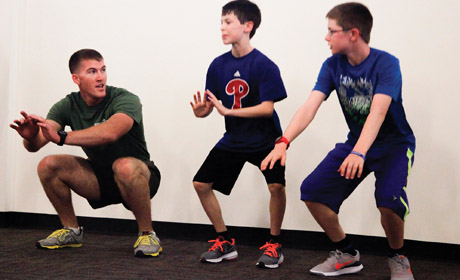 The U.S. Marine Corps are storming Nashville Sept. 7 – 11 during Marine Week Nashville. It’s the first time for Marine Week to land in Music City, and the event’s theme of “Community, Country and Corps” finds more than 80 free events for the public at numerous locations throughout the city.

The opening ceremony takes place at Nashville’s Public Square Park from 6 – 8 p.m. on Wednesday, Sept. 7, featuring a musical performance by Darryl Worlley and a presentation by Nashville Mayor Megan Barry.

During the week, your family can climb aboard a variety of the Corps’ aircraft and ground equipment at static displays throughout downtown. All ages can attend Marine Corps martial arts and military working dog demonstrations, work out alongside Marines during physical fitness drills and more.

You can also participate in community art projects with Marines, and little kids can meet our service men and women during Storytime with the Marines at 9:30 a.m. on Wednesday, Sept. 7 at Nashville Public Library. Also on Wednesday, there will wreath-laying ceremony from 9 – 9:30 a.m. at the John Seigenthaler Pedestrian Bridge.

“Marine Week serves as an opportunity for us to show the Nashville community the high standard of professionalism and discipline embodied by every Marine and how their service enables the Marine Corps to respond to crises around the world and to win our nation’s battles,” says 1st Lt. Johnny Henderson, public affairs officer for Special Purpose Marine Air-Ground Task Force Nashville.

The week wraps up with a remembrance ceremony in honor of the anniversary of the Sept. 11, 2001, attacks. The ceremony takes place at 9 a.m. at War Memorial Plaza followed by a live Marine Air-Ground Task Force demonstration at Riverfront Park.