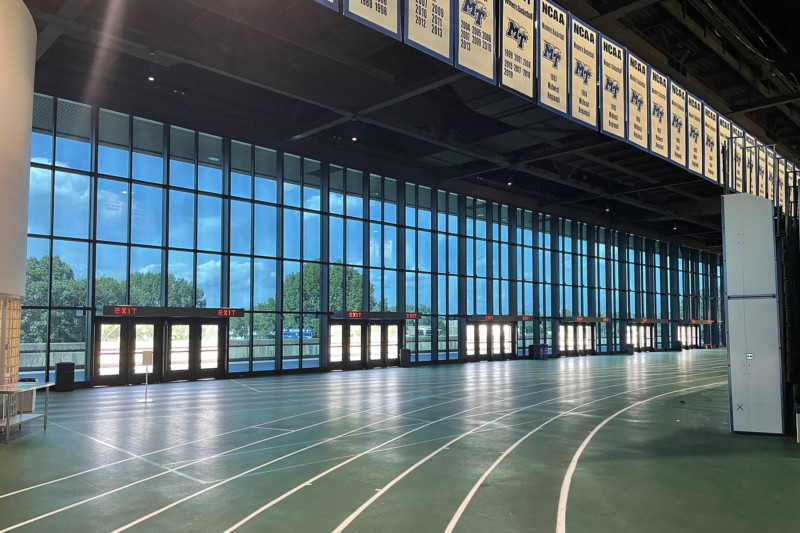 MTSU top administrators and coaches will gather to kick off a yearlong celebration of the 50th anniversary of the iconic Murphy Center, opened on December 11, 1972 and affectionately known as “The Glass House” — and now boasting a modernized look thanks to a $6 million renovation project.

Murphy Center has served as a campus anchor just off Middle Tennessee Boulevard and Greenland Drive as home to MTSU men’s and women’s basketball as well as the venue of choice for countless graduation ceremonies, concerts, state basketball tournaments and other special events.

MTSU will spotlight the installation of 33,000 square feet of new “smart windows” by the SageGlass company that automatically tint and clear in response to the sun, creating a dynamic indoor environment that can remove glare and ensure that the interior of the building is cool and comfortable for fans and student-athletes. It marks the largest installation of dynamic glass in higher education in the United States.

The “smart windows” block or dim the sun at the touch of a computer button on hot days and harness its heat on cool days, leading to energy savings and sustainability improvements.

President McPhee will also unveil samples of 17 large, timeline panels featuring vintage photos that will be installed around Murphy Center’s concourse track that provide fans with a self-guided nostalgic look-back on the five decades of Murphy Center history.

MTSU Athletics officials will show off a new basketball court design, retro uniforms that will be worn by the men’s team during a special anniversary game on Dec. 15 and discuss future upgrades to Murphy Center that include a dedicated, primary arena entrance and a new main lobby as part of the overall Build Blue capital campaign led by MTSU Athletics.