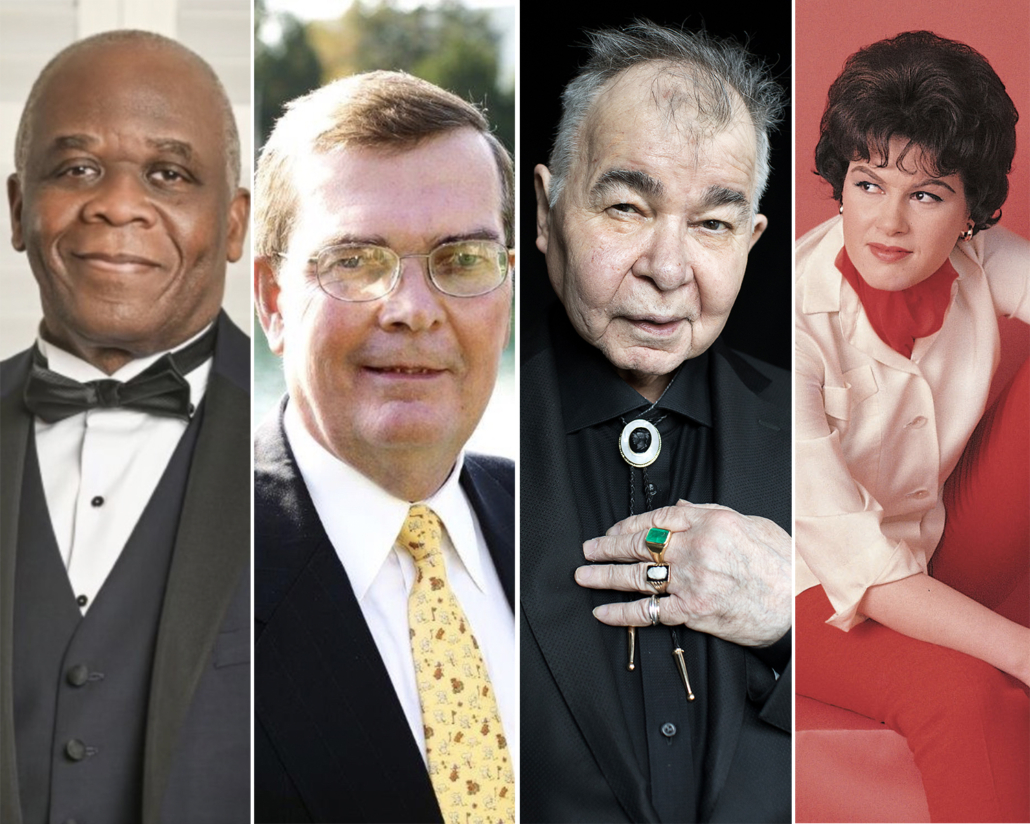 The induction ceremony will take place on Monday, October 10 at 11 a.m. at Music City Walk of Fame Park. Members of the public are invited to view the ceremony.

“Each of these four inductees left an enduring mark on Music City, and their influence continues today,” said Kevin Lavender, Executive Vice President at 5/3 Bank and chairman of the Board of Directors of the Nashville Convention & Visitors Corp. “The Music City Walk of Fame is proud to pay tribute to these legends with their induction, and we are especially honored to have their family members attend to accept on their behalf.”

The induction ceremony will bestow the 94th, 95th, 96th and 97th stars on the Music City Walk of Fame. Inductees are recognized for their significant contributions to preserving the musical heritage of Nashville and for contributing to the world through song.

Making appearances will be country, pop and rockabilly’s “Little Miss Dynamite” Brenda Lee, who will present for John Prine; Grammy-winning singer, actress, author and television personality Trisha Yearwood, who will present for Patsy Cline; best-selling and most awarded female gospel artist of all time CeCe Winans, who will present for Dr. Paul T. Kwami; and country superstar Garth Brooks, who will be the presenter for Ed Hardy. Each inductee will have a family member accepting the induction on their behalf: Prine’s wife, Fiona Whelan Prine; Cline’s daughter, Julie Fudge; Kwami’s son, Delali Kwami; and Hardy’s wife, Kim Hardy.

Prine released more than 18 albums and is a four-time Grammy winner, a Grammy Lifetime Achievement Award honoree, a seven-time Americana Music Award-winner, a PEN New England Lyrics Award recipient and member of both the Songwriters Hall of Fame and the Nashville Songwriters Hall of Fame. He is being celebrated with the You Got Gold: Celebrating the Life & Songs of John Prine festival from October 7-12. He passed away on April 7, 2020. Cline was a Grand Ole Opry member who bridged the gap to mainstream pop. Her classics include “Crazy,” “I Fall To Pieces” and “Walking After Midnight.” She tragically died in a plane crash on March 5, 1963.

Kwami was Musical Director, Curb-Beaman Chair and alumni member of the Fisk Jubilee Singers, and under his leadership the a capella ensemble of black spirituals earned a Grammy and performed at Carnegie Hall and the White House. He died on September 10, 2022, at age 70. Hardy was an active executive in Nashville’s music and hospitality industries, serving as chairman of Music City Inc.; on the NCVC Board of Directors, including as chairman; as President of Great American Country (GAC); as President and Chairman of the Country Music Association Board of Directors; and as CMA’s interim director. He passed away on July 31, 2022, at age 73.

The Music City Walk of Fame was created in 2006 on Nashville’s Music Mile, a roughly one-mile stretch that connects downtown to Music Row. Permanent sidewalk medallions with the names of inductees are displayed in a star design.

For more information about the Music City Walk of Fame, go to visitmusiccity.com/walkoffame.