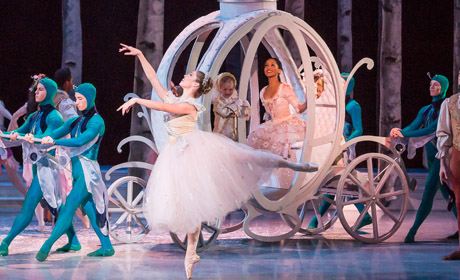 Add a world of enchanting wonder to your family’s weekend with a trip to TPAC’s Polk Theater to experience Nashville Ballet’s magnificent production of Cinderella.

Artistic Director/Choreographer Paul Vasterling’s interpretation of Cinderella goes back to the character’s early origins. You won’t find the meek, young girl who’s a victim of circumstance waiting to be rescued by Prince Charming in this telling of the age-old tale. Instead, you get to experience a more exciting take on a more assertive girl who isn’t afraid to hold her own against her wicked stepmother and evil stepsisters. What’s more, after her magical transformation and upon arriving at the grand ball, Cinderella doesn’t wait for the Prince to notice her — she makes the approach and goes after him!

Kayla Rowser performs the title role with utmost confidence, glamour and skill. She dances across the stage with such beauty and graceful distinction that her character truly enchants and captivates the audience, young and old alike. Judson Veach as the dashing, charming Prince delivers a masterful, commanding performance as he leaps across the stage, and Alexandra Meister’s elegant portrayal of Fairy Godmother is pure magic.

Vasterling’s interpretation involves a lot of symbolism, most poignantly the idea of the dancers’ pointe shoes being symbols of power. The opening scene finds Cinderella barefoot while her stepmother and stepsisters are en pointe, thus wielding power over her. By the time she steps into a pair of pointe shoes herself, Cinderella realizes and becomes her best, most confident self, fulfilling her destiny as a powerful young woman.

Speaking of those stepsisters, the casting of men to perform those roles is hysterical. It’s a custom dating back to the first production of Cinderella as a ballet in 1945 at Moscow, Russia’s Bolshoi Theater. Christopher Stuart and Jon Upleger charge the stage with an enormous amount of humor as they attempt to dance en pointe, giving their characters a truly over-the-top, bumbling quality that adds a lot of oomph to the production. Stuart and Upleger play well off of each other and really ham it up in a way that invites the audience in on the joke.

The lush scenery borrowed from The Washington Ballet and Pittsburgh Ballet Theatre creates the succinct, magical fairytale world, and the inclusion of several young children in the cast (all of whom are School of Nashville Ballet students) as bumblebees and snow angels infuses a delightful amount of youthful whimsy to the production.

Cinderella is a spectacular family-friendly outing this weekend, and a superb way to kick off Nashville Ballet’s 2016 – 2017 season.