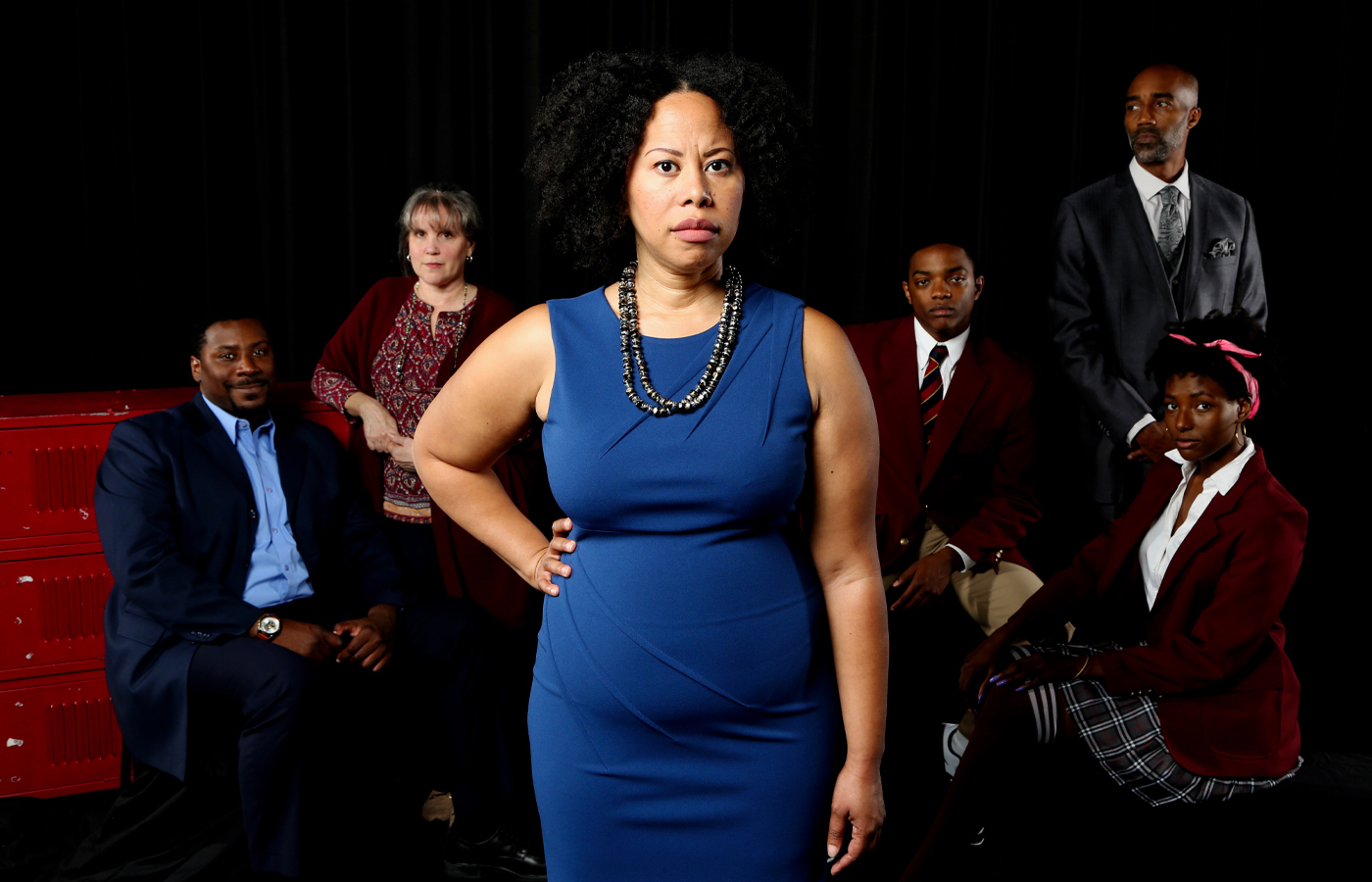 Nashville Rep's second show of its 35th season is a gripping drama by Dominique Morisseau. Pipeline is mainly about a family struggling to escape a particular social prophecy. The play's title refers to the "school-to-prison pipeline" wherein underprivileged (mostly black) students are escorted from the public school system to behind bars.

There are multiple topics covered in this intensely acted 90-minute, one-act play. Within its framework, it's about race in the modern age, it's about the lengths a mother will go to in order to protect her child and it also speaks to the reality of our country's public school system.

The show center's around Nya (deftly performed by Alicia Haymer). She's a teacher in an impoverished New York City school who's divorced as the result of an affair she had. She attempts to soothe her anxiety through cigarettes and booze. She has sent her son Omari (Gerold Oliver) away to a private school in hopes of circumventing the criminal future she fears for him. She's constantly haunted by the words of poet Gwendolyn Brooks' "We Real Cool," which is about young black men marking time on their way to an early grave.

Nya's fear heightens when she learns Omari has been suspended from school, a "third strike," for assaulting a teacher and that they're pressing charges against him. The plot thickens, however, when Omari reveals his side of the story — that his explosion was the result of racial profiling and stereotyping by his teacher during a discussion of Richard Wright's Native Son. Omari's version of the "attack" is that when he got up to walk out of the classroom, the teacher got in his way so he pushed him to get by. Yet, it was caught on camera phones with at threat of going viral on social media, and as we all know, the jury of public opinion is quite damning.

Omari's schoolmate and girlfriend, Jasmine (Candace-Omnira), explains his behavior by stating, "Sometimes people push you too far, make you feel like an animal from another jungle. At that point, you become the expectation." BAM!

Throughout the play, Nya is dangerously consumed by the fear that her son will self-destruct, given his intense anger. What's more, she also carries the weight of a burden that it's somehow her fault as she pleads to the school board not to press charges. She goes as far to say that Omari's anger "is not his sin, it's his inheritance."

It's all powerful stuff, and Director Jon Royal brings out a razor-sharp edge in his cast. Oliver so brilliantly infuses Omari with such a level of explosive anger that it results in a frightening on-the-edge-of-your-seat effect for the audience. He delivers a genuine performance. Candace-Omnira delivers a spot-on portrayal of her character with exact cutting-edge sass that comes with Jasmine's life experience.

Haymer's striking performance is at its height during her character's debilitating panic attack. Throughout the show, Haymer does a spectacular job portraying a character so deeply torn and haunted. Haymer is precise in pulling you into every part of Nya's emotional journey.

There are several explosive scenes throughout the show, including the ones involving Xavier (Joel Diggs), Nya's ex and Omari's father. The aggression that unfolds between Xavier and Omari in the hospital waiting room is intense, but it also casts a light onto the pain that exists within Omari and how that dynamic contributes to his demeanor.

As stated earlier, Morisseau's play covers a lot of territory and makes all kinds of necessary statements. One of the places where the play excels the most is the dark arena where the characters exist, especially in the urban school where Nya works. The staff lounge scenes reveal a lot within the context of the teachers basically doing the best they can to keep the peace in a combat zone among the students.

Mary Tanner's fiery performance as Laurie, Nya's fellow school teacher, is one of the most incredible parts of the production. Laurie's the battle-scarred teacher (a former student attack led to her having cosmetic facial surgery) who uses the lounge as her sacred space to bewail all the things that are wrong in the school system, with the students and society. Her energetic rants are sprinkled with the best humor that exists in the show, and Tanner captures the heart of the modern-day, frustrated public school teacher with aplomb. If you're a school teacher or know someone who is and have heard their stories, you'll appreciate the authenticity Tanner brings to her role.

Another of the production's powerfully heartfelt moments comes from Barry G. Kenney Jr. as the school security guard, Dun. He's a likable fellow throughout his scenes, "one of the last good guys." But when things come to heads between Dun and Tanner over a certain security protocol, Kennedy delivers an explosive moment … one that shines a spotlight on another unfortunate reality in our society today —  that white privilege is real, and there does exist a bias against people of color in many arenas. Dun vehemently points out to Tanner (who's white) that had he acted upon the situation the way she expected then he'd suffer harsh repercussions simply because he's black. It's an uncomfortable scenario that's unfortunately the reality for many of our country's citizens of color. It's all-the-more reason why this play is vitally important.

Pipeline for certain leaves you with a lot to think about and perhaps reconsider. It's an important work. Nashville Rep's production of Pipeline does exactly what a piece of compelling theater should do — challenge one to dig deeper within one's heart and soul to find a greater sense of compassion and empathy for those who walk this life through a different set of shoes and skin.

Thank you, Nashville Rep, for bringing this necessary dialogue to your stage.