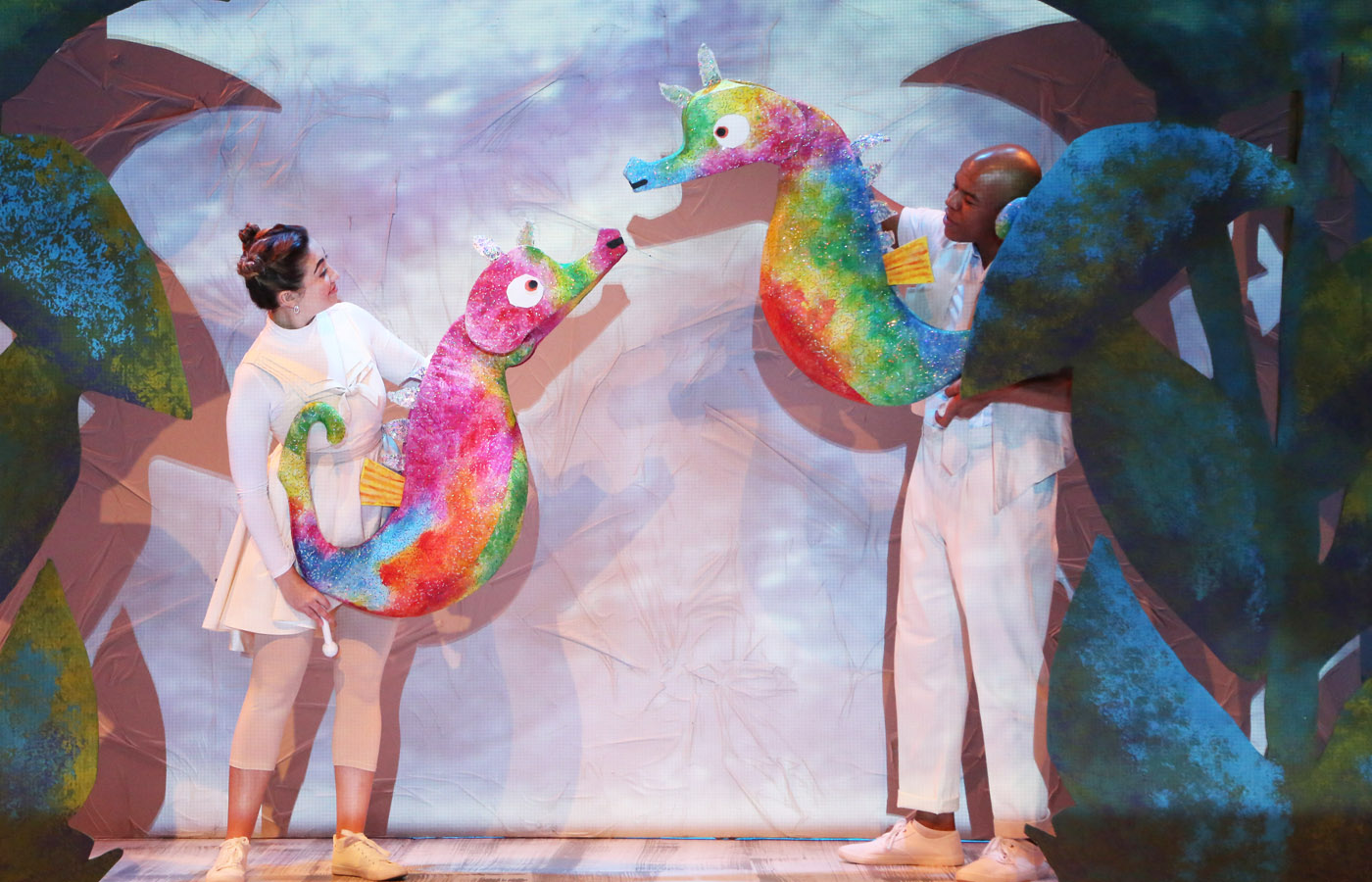 The wonderful, colorful world of children's author/illustrator Eric Carle comes to life in a grand way with NCT's current production of The Very Hungry Caterpillar Show. Created by Jonathan Rockefeller, the show first premiered in 2016 with a successful off-Broadway run.

NCT's one-hour production is a vibrant, mesmerizing journey through four of Carle's delightful tales — Brown Bear, Brown Bear; Mister Seahorse; The Very Lonely Firefly; and Carle's signature work, The Very Hungry Caterpillar. Director Ernie Nolan excels at tapping into the awe and wonder that lives in the hearts and minds of young children; that magic is alive and well in this captivating production.

NCT presents each story with 75 beautiful, hand-crafted puppets. NCT's cast of three — Isabella Karina Coelho, DéYonté Jenkins and Kristin McCalley – masterfully handle the puppets with a nice, slow pace while taking the audience through each story. Dressed in white against a white backdrop, the stage becomes a blank canvas for Carle's iconic illustrations in brilliant 3D form.

Brown Bear, Brown Bear opens the performance. The entire audience of kids and adults gasped in delight when the life-size bear ambles onstage. More "oohs" and "aahs" fill the air as a non-stop parade of enchanting animal puppets grace the stage.

Scott Leathers' lighting and Galen Fott's projection design transform the stage into a spectacular underwater universe during the Mister Seahorse scene. The rainbow-colored, sparkling seahorses are stunning as they catch the light and shimmer about. After Mrs. Seahorse gives Mr. Seahorse her eggs to keep safe, Mr. Seahorse swims around meeting a variety of other sea creatures who are also protecting their eggs. The hatching of the baby seahorses is a festive surprise.

In The Very Lonely Firefly, a solitary little lightning bug seeks companionship as he's drawn to a series of lights — from a burning candle to a car's headlights to bursts of fireworks across the sky — in hopes of finding his tribe. Eventually he finds what he's looking for, and the glowing tails of the enchanting firefly puppets are amazingly lifelike.

As the fireflies fade away, the moon behind them seamlessly transitions to the familiar moon behind the egg from Carle's most well-known tale, The Very Hungry Caterpillar. The festive romp through the beloved story finds the famished insect wiggling all around the stage. Children were squealing in delight thanks to Jenkins' masterful maneuvering of the puppet.

Little ones know the story well, and those in the audience on opening night were having a blast watching the caterpillar chew his way through an assortment of goodies — from apples and oranges to lollipops and ice cream cones. All that munching turns the caterpillar into a big roly-poly pudge yielding even more chuckles from the pint-sized crowd. Alas, the biggest delightful gasp from the audience is the result of the caterpillar's exquisite metamorphosis into a beautiful butterfly.

NCT's charming production is a true theatrical gem for the toddler and preschool crowd. It's a tremendous first-time theater experience for the littlest ones in your family. The Very Hungry Caterpillar Show is also the perfect avenue to bridge your child's love of Eric Carle's books to a love of the theater.