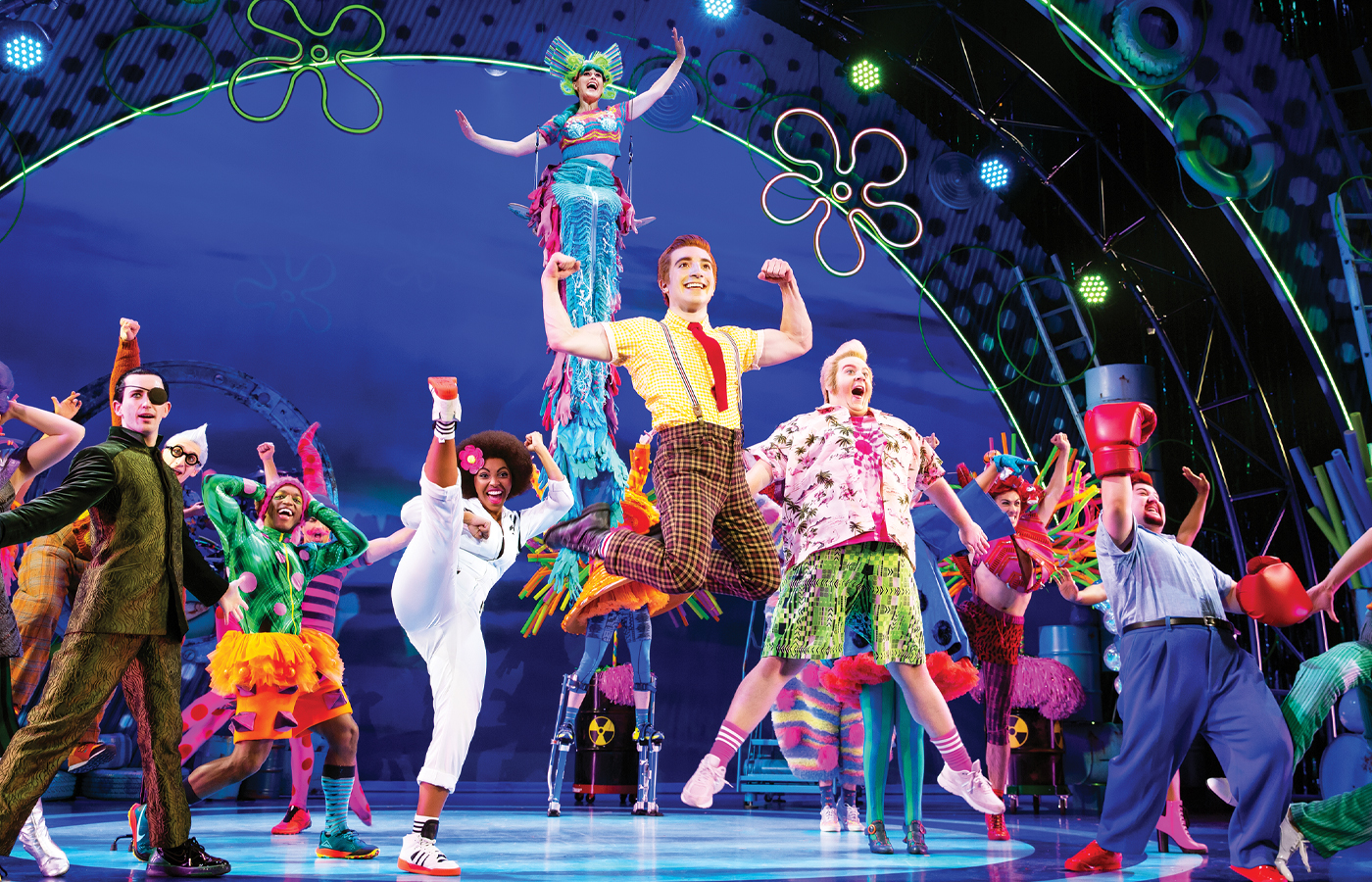 It's an amazing thing to experience a truly brilliant work of theater that finds you leaving the venue with a skip in your step as your heart and soul effervesce with pure joy. That's exactly what you can expect if you go to TPAC this week to experience The SpongeBob Musical.

It's the first national tour of the show, and this is a musical I've been dying to see since it opened on Broadway. I've always loved the SpongeBob character and his universe housed on Nickelodeon (the cartoon TV show launched in 1999 well into my adulthood). The SpongeBob Musical got 12 Tony Award nominations in 2018 and won one of them (Best Scenic Design of a Musical, and rightly so! The Band's Visit swept the Tonys that year with a whopping 10 awards). 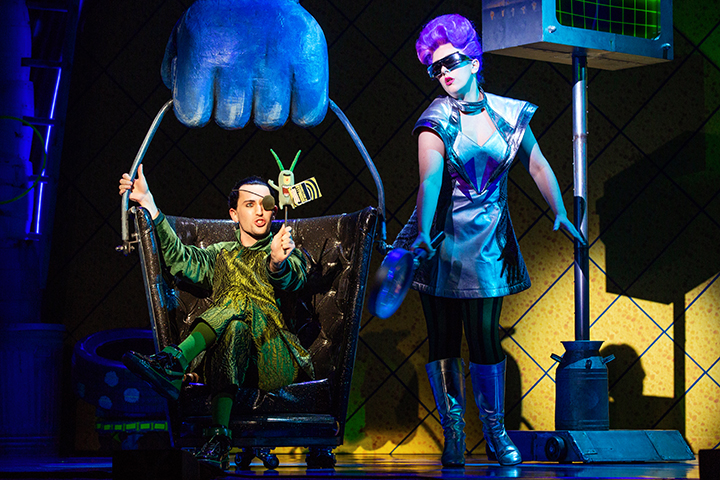 The SpongeBob Musical is spectacular across the board, so much so that's it is in a league of its own. It's the most visually eye-popping show in Broadway history. David Zinn's scenic and costume design coupled with Kevin Adams' lighting design, Peter Nigrini's projections and Charles G. Lapointe's hair and wig design make for a visually enchanting experience that mesmerizes you whether you're 5 or 95. It's a bright, festive, sparkling romp through the magical world of SpongeBob's Bikini Bottom world. You won't find a more colorful show, that's for sure!

The production is pure fun whether or not you're familiar with the TV show. If you grew up watching SpongeBob SquarePants on TV, you're going to love this show with immense passion. If you've never seen the TV show, or even don't know who SpongeBob is (if the latter's the case, what pineapple have you been living in for the past 20 years?), you'll love this show, too. It has something for everyone. There are jokes that kids will love, and there's a good bit of humor that goes over the kids' heads that adults will chuckle at like the bureaucratic ineptness of the mayor's office in the midst of a crisis, panic-rousing media coverage and the dig at fake news. 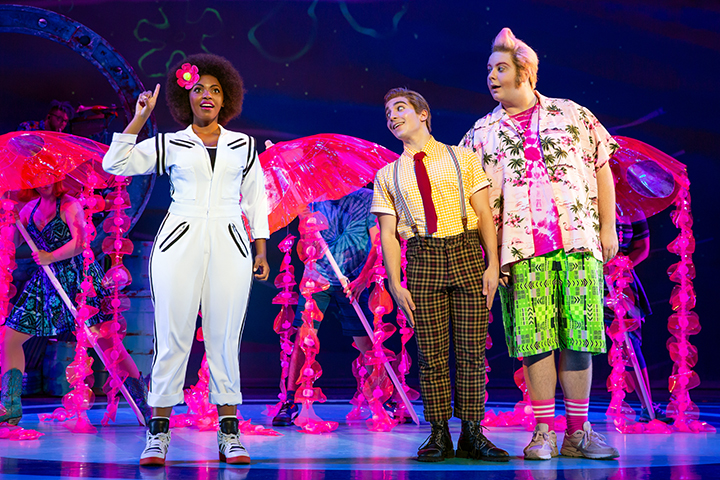 Tina Landau's direction is exquisite as is the show's choreography by Christopher Gattelli. SpongeBob is a dazzling, high-energy production, and no one else in the cast exerts so much as the star of the show, Lorenzo Pugliese as SpongeBob SquarePants. It's a demanding role, and Pugliese masterfully pulls it off in how he brings a two-dimensional cartoon character to life onstage. In fact, that's true for every cast member. Collectively, the cast brilliantly creates the SpongeBob universe in a grand human way. If you know the TV show, then you immediately recognize each character onstage, and you'll quickly realize how adept each actor is in portraying these beloved characters with all their whimsical quirks.

Pugliese shines bright showcasing SpongeBob's relentless optimism. I can't imagine anyone else more perfect for this role. The fresh-out-of-college 22-year-old possesses a massive, agile talent. He's fun, he's charming, he's energetic and he captures the audience immediately. Likewise, Beau Bradshaw delivers the true essence of SpongeBob's best friend, Patrick Star — mostly slow and easygoing but can sometimes become aggressive as real starfish do (evident when he has a fight with his BFF after the Sardine Corps name Patrick their savior). One of the favorite lines in the show comes courtesy of Bradshaw when he asks if mayonnaise is a musical instrument (a gag lifted straight from the cartoon). 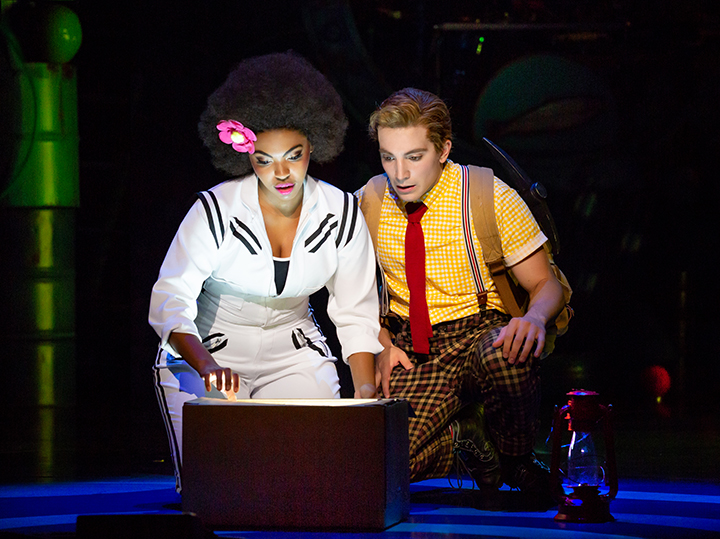 Daria Pilar Redus brings a huge stage presence to her role as Sandy Cheeks, the Texan squirrel who works as a scientist and has a penchant for karate. Redus is a powerful performer and an outstanding singer.

Cody Cooley is a crowd favorite playing the sarcastic octopus Squidward Tentacles. Cooley delivers Squidward's dry sense of humor with aplomb while perfectly capturing his character's belief that he's a talented artist and musician. Cooley serves up one of the show's favorite musical numbers, "I'm Not a Loser." This rambunctious scene finds Squidward and a large group of Sea Anemones decked out in shimmering costumes executing a bold display of tap-dancing footwork.

Tristan McIntyre and Caitlin Ort are so much fun as Sheldon Plankton and Karen the Computer, respectively. They serve as the story's antagonists — they set out to cause a volcano eruption to destroy Bikini Bottom in an attempt to lure the citizens into an escape pod where they can hypnotize them into liking the chum they serve at their restaurant, The Chum Bucket. Their diabolical scheme gives the show its main story arc as SpongeBob, Patrick and Sandy set out to save the day.

You'll experience all the characters you love from the TV show, and the cast carries out all of their antics without a hitch. The comic unpredictability is multi-layered giving everyone in the audience much to enjoy. Everyone in the cast delivers a phenomenal array of singing, dancing, comedy and other hijinks — it's impossible to keep count of the number of jaw-dropping, awe-inspiring moments throughout this slick production. 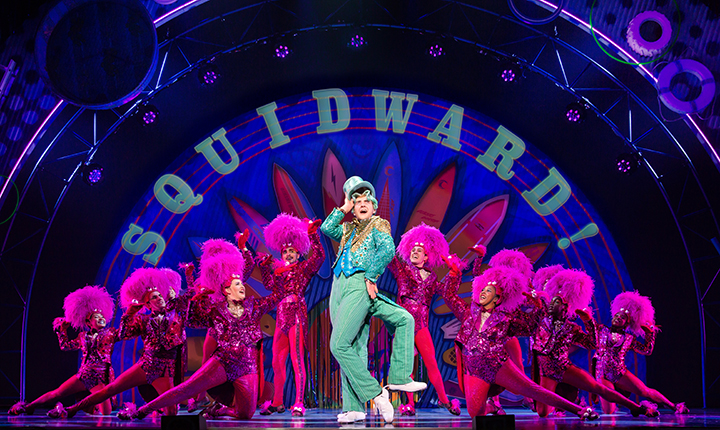 One of the unique aspects of The SpongeBob Musical is its music. Whereas most Broadway shows come with music created by one composer, SpongeBob comes with many, and they're an amazing assortment of pop, rock, country and gospel artists. They include Panic! at the Disco; David Bowie and Brian Eno; Cyndi Lauper and Rob Hyman; The Flaming Lips; Lady Antebellum; Yolanda Adams; John Legend, Jonathan Coulton; They Might Be Giants; Sara Bareilles; Steven Tyler and Joe Perry of Aerosmith; Plain White T's; and more.

This isn't a scenario where the show is adapting songs from the aforementioned artists in a jukebox musical manner. The artists were commissioned to write songs specifically for the musical and its storyline. It's one of the greatest collaborative efforts ever. The result is a triumphant success! The huge range of musical styles serves the show well. It definitely comes off as the party to beat all musical parties. Every musical number shines, but "Super Sea Star Savior" (Yolanda Adams) is by far one of the show's most memorable with its exuberant gospel flair. All of the musical numbers are a significant part of propelling the show's storyline, and it's so wonderful how the different genres are as diverse as the characters in SpongeBob's world. 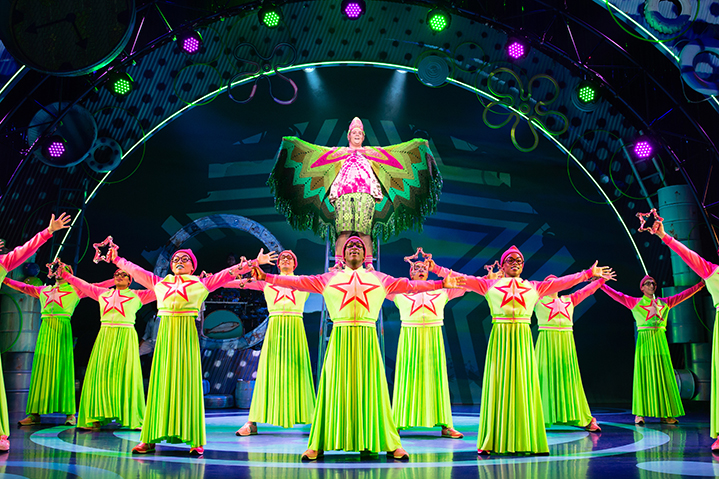 In addition to the musical numbers, another aspect of SpongeBob's fun factor is Foley Fish. He's played by Foley artist (sound effects) and percussionist Ryan Blihovde. The 25-year-old Belmont University graduate brings all those SpongeBob universe sounds to the show. He uses the same devices that Nickelodeon uses on the TV show. From SpongeBob's shoes squeaking to the thunderous booms of rolling boulders, Blihovde provides all the special sound effects in perfect sync to the action onstage. He's a visible part of the show, and it's great fun to watch him work.

The opening night audience spanned the spectrum in regard to age. From giddy 5-year-olds to folks in their 80s, everyone was enjoying a fantastic time. If you have a child who has not yet had a live theater experience, this is the perfect show to make that introduction. I've never seen so many happy children in a theater setting in my 25 years reviewing theater. And if you don't have kids, this show makes for an unforgettable date night outing that can't be beat! The magic of The SpongeBob Musical is undeniable in how it brings out the child at heart in everyone, no matter how old you are. I can't encourage you enough to go experience the joy of The SpongeBob Musical.