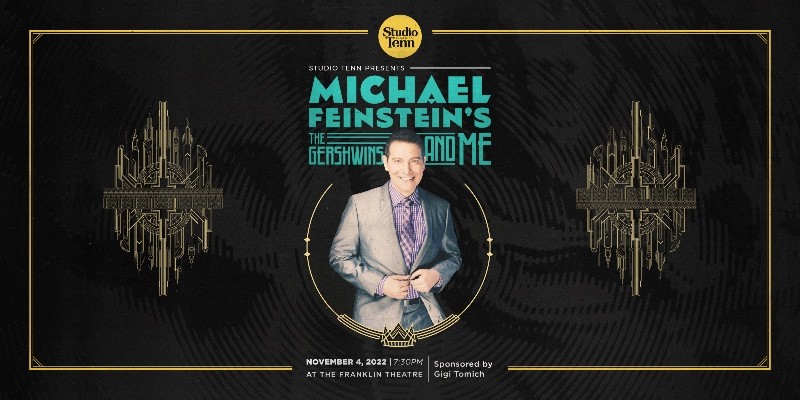 Franklin-based professional regional theatre company Studio Tenn is presenting The Gershwins & Me performed by Michael Feinstein at 7 p.m. on November 4 at the Franklin Theatre.

Guests will spend an evening with Feinstein as he leads a journey through the Great American Songbook, which features songs from Cole Porter, Irving Berlin, George and Ira Gershwin and many more. During the show, Feinstein will share unforgettable stories and anecdotes from the music that defined many of the popular songs and scores from the last century.

“As we all know, Franklin is such a special place, in part because of the extent of community involvement and support – Studio Tenn plays an important role in that culture that we take very seriously,” said Lynne McAlister, Development Chair for Studio Tenn’s Board of Directors. “We’re fortunate that many of the most talented and recognized professionals in the world, like Michael, recognize the opportunity to share their gifts with our community – this will certainly be a memorable evening.”

Feinstein’s vision for the Gershwins and Me event is that it feels as if the guests are attending an intimate party in his living room, where he plays the piano and converses with friends. Feinstein will take questions and requests from the crowd while sharing anecdotes and personal stories that will take guests inside of Songbook’s score and the talent involved – like no one else can.

Feinstein has rightfully been given the title of “ambassador” for Great American Songbook. He was just 26 years old when he got the chance of a lifetime: a job with his hero, Ira Gershwin. During their six-year partnership, the two became close friends. Feinstein blossomed under Gershwin’s mentorship and Gershwin was reinvigorated by the younger man’s zeal for his and his brother George’s legacy.

Upcoming Studio Tenn performances include the Cabaret On Stage series, Charles Dickens’ A Christmas Carol, Smoke on the Mountain, and Here You Come Again (featuring the music of Dolly Parton).

Season tickets for Studio Tenn’s 2022-23 season are available at studiotenn.org.