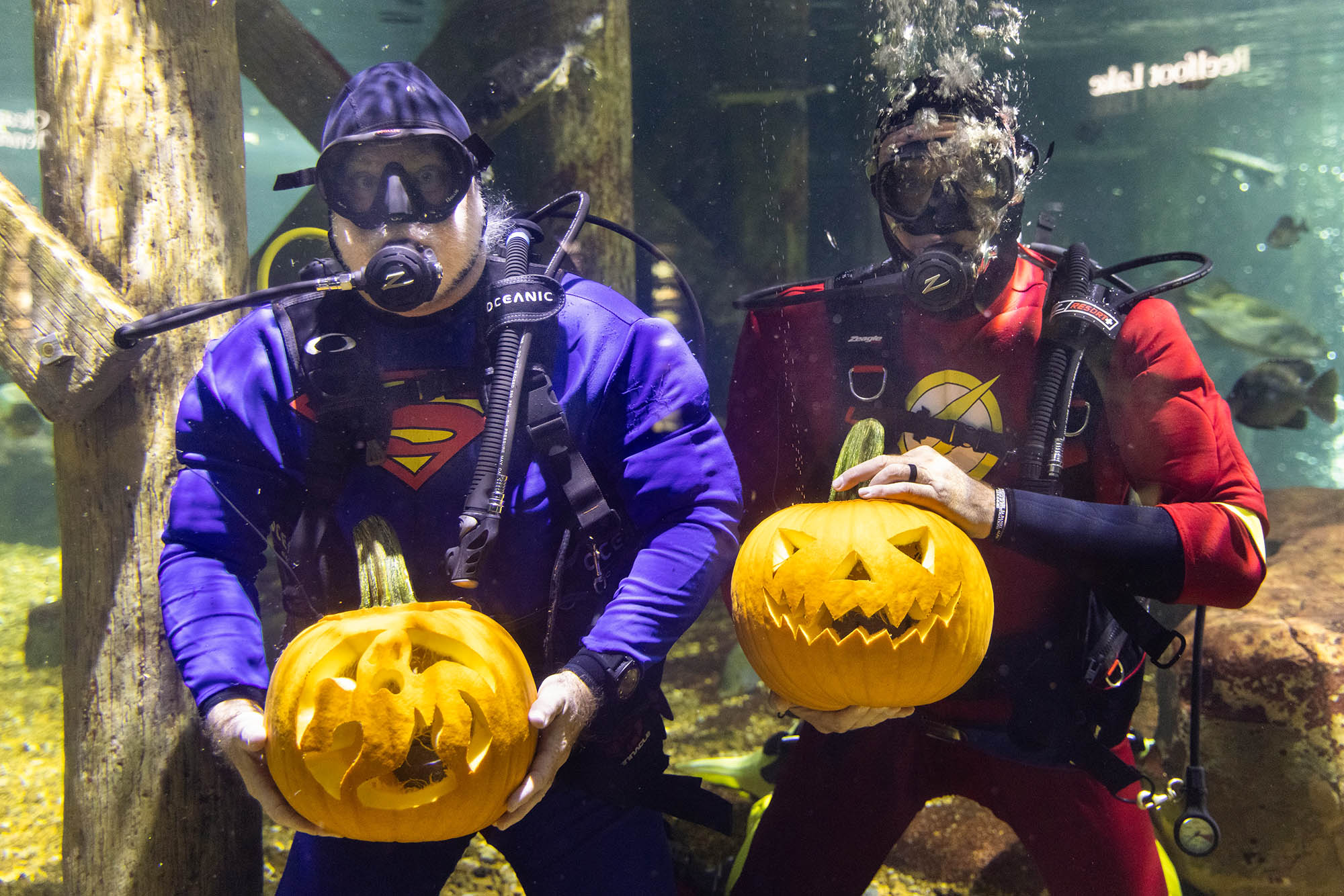 Divers Craig Walker, left, and Chris Kay carve pumpkins dressed as sueprheroes in the Tennessee River exhibit at the Tennessee Aquarium to kick off the start of ODDtober.

Who’s ready for an ODDtober at Tennessee Aquarium?

Hollywood has long told moviegoers to fear the waters of the Amazon River, where they say a terrifying predator lurks beneath the waves, ready to devour massive prey at the slightest disturbance of the water’s surface.

Though Red-bellied Piranha possess a fearsome reputation, that portrayal is far from the truth, and humans are not on the menu for this toothy Amazonian fish. They are omnivores, eating a varied diet that includes aquatic vegetation, other fish, invertebrates, insects and small terrestrial animals.

Piranha are one of several often-maligned creatures having myths about their “terrifying” nature busted as ODDtober at the Tennessee Aquarium attempts to “un-spooky a species” and celebrate nature’s wild and weird side during the month of October.

As guests explore the halls of the River Journey and Ocean Journey buildings, they’ll find new ODD facts about some of the facility’s stranger inhabitants scattered throughout its buildings and exhibits and get the chance to observe those weirdly wonderful behaviors in person.

Did you know that Giant Gouramis build bubble nests at the water’s surface, which camouflage their eggs from predators? Or that Sand Tiger Sharks come to the water’s surface to gulp air, making them more buoyant and able to float motionless in the water? If you’ve ever wondered how sea stars eat (hint: it’s by pushing their stomach out of their mouth and turning it inside out), then ODDtober is the time to visit the Aquarium.

Resident Twitter influencer and celebrit-eel Miguel Wattson the Electric Eel (@EelectricMiguel) will demonstrate his extraordinary bio-electric abilities again this year. His electrical discharges, typically used to trigger his tweets, will also activate a string of electric Jack-o’-lanterns hung from the ceiling next to his habitat in the Rivers of the World gallery.

Other exhibits are also getting into the spirit of the season. The Aquarium’s Delta Country gallery, already adorned with hanging moss and fog that gives it a haunting vibe even during less-spooky times of the year, will be getting its own (not eel-powered) seasonal decorations.

At the end of their ODD-yssey through the Aquarium, guests visiting during October can pick up a special free collectible sticker from the gift shop (while supplies last) by mentioning ODDtober.

Once their journey from the mountains to the sea is concluded, guests can venture to the IMAX 3D Theater, where two 3D films explore life above and below the water. Wings Over Water 3D features stunning footage telling the stories of three bird species – the Sandhill Crane, the Yellow Warbler and the Mallard duck – as they navigate the interconnected rivers, lakes and wetlands of North America’s heartland. Sea Lions: Life by a Whisker 3D is the heartwarming tale of life beneath the waves of Australia’s southern coast, where Australian Sea Lions live, play and explore.

Aquascarium, the Aquarium’s spooky family-friendly Halloween celebration, also returns to close out the month of October. During this single-day event on Friday, Oct. 28, attendees will get to explore the Aquarium after hours in search of elusive creatures as they meet beloved SCUBA diving pop culture characters and collect plenty of candy.

Aquascarium begins at 4 p.m. with final entry at 7 p.m., and both Aquarium buildings close promptly at 8 p.m. Tickets must be purchased in advance online and are $8 for Aquarium members and $35 for non-members. There are no timed-entry tickets for this year’s event.

ODDtober begins Oct. 1 and runs through the month of October. To learn more about ODDtober and Aquascarium, visit tnaqua.org/oddtober.