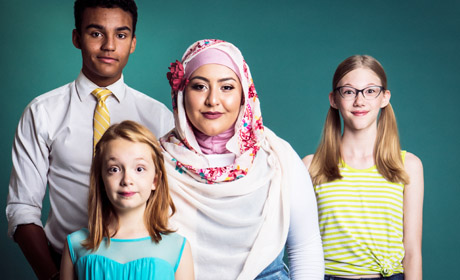 For The Theater Bug Artistic Director Cori Laemmel, inspiration for the company’s original shows comes from real life situations … ones that often transpire among the large group of kids that make up The Theater Bug program. Such is the case with the Bug’s summer musical, If I Were You, running July 13 – Aug. 5.

Laemmel, who wrote the musical with long-time friend Laura Matula, dubs it “The Empathy Play.” The idea came from Laemmel’s observation of the kids who surround her.

“Early on, the idea I had was based on watching the kids and realizing they have so many shared experiences,” says Laemmel.

She uses a typical day as an example. “Generally, the pattern of kids’ days can look really similar. They wake up, they spend time with their families, they’re at school, maybe there are after-school activities, they go home, there’s homework, etc.,” she says.

While the patterns are similar, they way each kid experiences them is different depending on his or her personal stories.

“One of the things we talk about with each other in general as we’re learning together is just because something wouldn’t make YOU feel bad doesn’t mean that it’s not making someone else feel bad,” Laemmel says. “Somebody’s experience can be different from yours even though it looks really similar. It’s empathy,” she adds.

IF I WERE YOU: A SYNOPSIS

If I Were You features 70 young actors, ages 6 – 18, split between two casts during the musical’s run. The story centers around four characters who don’t know each other but share the same birthday. There’s Phoebe (8), Bailey (12), Noorah (15) and Jonah (18).

Act 1 gives the audience a snapshot of a day in the life of each character. Act 2 turns the table by the actors switching roles. For instance, Jonah’s storyline is about the space between being a child and an adult while learning how to come into that. A lifelong homeschooler, he’s graduating, getting ready to move away and suddenly falls in love for the first time.

“In Act 2, it’s the same plot line continuing, but the character is now played by a girl, so audience members have to ask themselves if they are now feeling differently about the relationship between these two young people now that it’s two females instead of a boy and a girl,” Laemmel says.

Likewise, the youngest character, Phoebe, has an anxiety disorder. In Act 1, she struggles with day-to-day things. In the second act, her character is portrayed by the 18-year-old boy.

SOMETHING TO TALK ABOUT

One of the greatest things about any theatrical experience is how it provokes thought, reflection and all-important dialogue.

In Act 1, 15-year-old Noorah is the only Muslim girl in her school who wears a hijab. She talks a lot about how people treat her differently and the prejudices she faces. In Act 2, it’s a Caucasian girl playing the role.

“When you see her [the Caucasian girl] being mistreated, are you more concerned for her? Do your sympathies change? We have to ask a lot of really hard questions of ourselves, which I love,” Laemmel says.

Laemmel is quick to point out that the show is not about one character needing to learn a lesson about how to walk a mile in someone else’s shoes. “It’s really more about audience members asking themselves how they now view the character differently when it’s played by a different actor,” she says.

Recognizing that everyone connects with things in different ways, Laemmel says she thinks adults will ask questions of themselves about their own views and their own empathy.

What does she hope young audience members take away from the experience? That they see themselves in the characters on stage.

“For kids who feel different or have walked through struggles they feel like people don’t understand, I hope they see themselves and feel empowered by that,” Laemmel says.