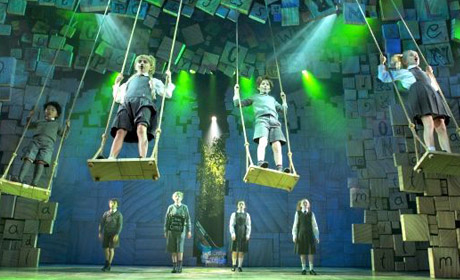 Changing one's destiny and the power of words are the central themes in Matilda the Musical, playing this week at TPAC's Jackson Hall. Based on Roald Dahl's 1988 children's novel, Matilda story made its stage debut on London's West End in 2011, winning an unheard of seven Olivier Awards including Best New Musical.

In 2013, Matilda landed on Broadway garnering four Tony Awards that year including Best Book of a Musical and Best Scenic Design. Written for adults with children in mind, this highly entertaining show is appropriate for everyone in your family. Children who are fans of Dahl's book will love experiencing Matilda's world on stage.

Rob Howell's imaginative, ever-changing set design is a huge part of the show itself, especially the Act II's playground scene during the standout "When I Grow Up" number in which several children glide high over the stage on giant swings. One of the best things about Matilda is its large cast of children and its catchy musical numbers. It's great to see young folks in a professional theatrical show, and it's great for kids in the audience to experience their peers on stage.

Although at times it's difficult to decipher exactly what the youth cast is singing during musical numbers due to diction issues, the kids bring a lot of vibrant energy to the show. Evan Gray as the pudgy, chocolate-cake devouring Bruce Bogtrotter and Austyn Johnson as the pigtail-bearing Amanda Thripp provide memorable, funny moments throughout the production.

During the show's rock-anthem, "Revolting Children," led by Gray, there was a technical glitch with the stage set that literally stopped the show for a minute. Although it was an unfortunate moment, it was great to see how the young cast handled it like true pros when they picked back up to finish the song and hefty choreography. After all, it's LIVE theater!

At the center of the youth cast of characters, of course, is Matilda Wormwood herself. At Wednesday night's performance, Savannah Grace Elmer dazzled the audience with her talent portraying the precocious classic book-loving, storytelling 5-year-old who discovers a special power of telekinesis (two other girls, Sarah McKinley Austin and Lily Brooks O'Briant, share the role on alternate performances). Elmer endears Matilda to the audience and appropriately sets the tone for her character with a succinctly sassy performance of her first solo number, "Naughty."

In Dahl's stories, it's mostly the adults who are the villains; they're either stealing the magic out of childhood or even simply representing the inevitable grim journey into adulthood. In Matilda, it's her parents and the child-hating, hammer-throwing (and child-throwing!) Trunchbull who are the story's antagonists, and each of the actors in this show do an exemplary job of their respective characters' over-the-top antics and attempts to stand in Matlida's way.

Silva (who was also in the Broadway company of Matilda) and Mattfeld in particular give wonderful performances as Matilda's mean, vulgar parents, yet do so in a comical way that engages the audience while offering a more dynamic look into Matilda's bleak home life.

While Abeles doesn't portray Trunchbull quite as sinister as Bertie Carvel who originated the role both on West End and Broadway, he does a nice job of bringing a dreaded doom-and-gloom atmosphere to Matilda's school environment. He provides one of the most comical moments in the show by way of a perfectly executed flip off of a trampoline.

One of the most captivating elements of this show's story is how Matilda's confidence and self-esteem are rooted in the power of words and language. Ultimately, it's a story about empowerment, and that message is even more compelling coming from a child's perspective.  It's a festive two-and-a-half hours to experience with your kids!