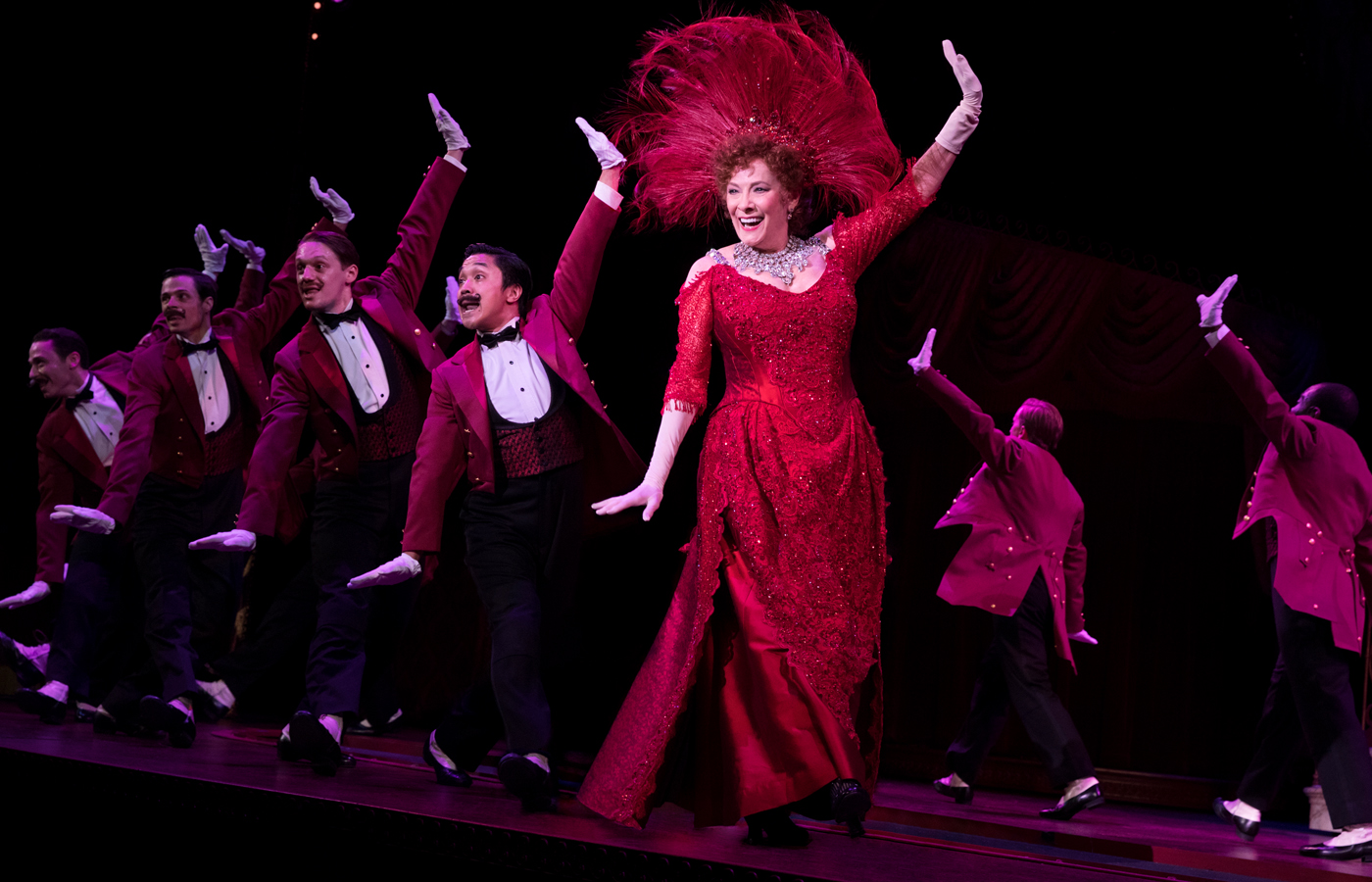 Hello, Dolly! is a tremendous feel-good show, and I can't think of a more perfect, dazzling family-friendly production. It's my all-time favorite musical for all of the aforementioned reasons. I've been waiting nearly a year with bated breath to see this touring production starring Broadway legend Betty Buckley. I was fortunate to see both Bette Midler and Bernadette Peters in the title role during the Broadway revival last year at the glorious Shubert Theatre in New York City (both productions were out-of-this-world phenomenal, by the way). And now, I can proudly say I've experienced the Dolly Gallagher Levi trifecta of "B": Bette, Bernadette and Betty!

These past few months of waiting for Dolly to arrive at TPAC I've often wondered if the touring show would feel a lot different than the sitting show on Broadway. Here's the absolute truth: THIS production of Hello, Dolly! is sheer theatrical ecstasy! 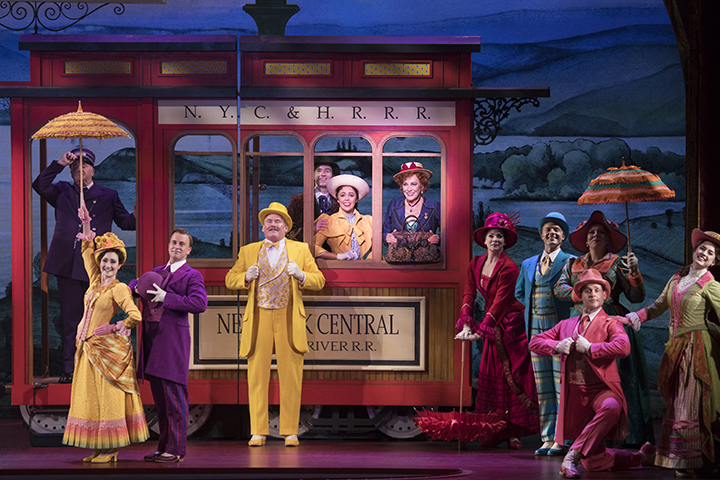 The show has enjoyed four Broadway revivals — 1975, 1978, 1995 and 2017 — in addition to West End productions and numerous tours. Dolly is also a favorite among regional theaters. The 2017 Broadway revival garnered four Tony Awards.

I'll admit I was real curious and eager to experience Buckley as Dolly Levi. With a ton of musical theater experience under her belt (she originated the role of Grizabella in Cats — and won a Tony for it — for starters!), this beloved, accomplished actress isn't known for comedic roles. In fact, during my interview with Analisa Leaming (who plays Irene Molloy), she let me know that Buckley's version of Dolly is a lot different than what I might expect having seen Midler and Peters, who are natural comedians.

Leaming is correct. Buckley's portrayal of Dolly indeed exists in a different arena, and it's the one I love best, because it's the one that's the most authentic. The 71-year-old darling brings Dolly Levi to life with an unparalleled amount of realistic emotional depth and authentic humanity. Yes, it's comical that Dolly has a calling card to garner business for just about everything imaginable, but that reality speaks to the desperation of her hand-to-mouth existence in the time following the death of her beloved husband, Ephram. There's a deep loneliness within Dolly that many actors seldom fully tap into (if at all) when portraying the character. Too often, actors portraying Dolly render a happy-go-lucky funny character that lacks the kind of depth that fully connects people to her. Buckley, though, knocks it out of the park with a bold character who is fully dimensional and thoroughly developed at long last. 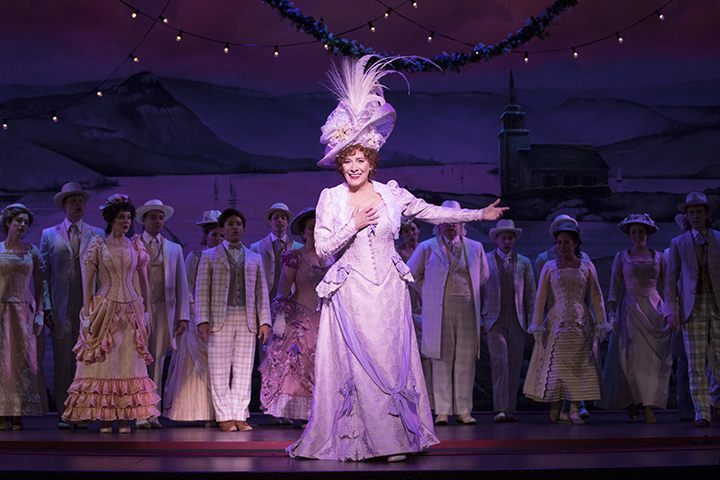 Buckley gives us a Dolly Levi who possesses the sharp wit we expect while drawing us in to the character's vulnerability — whose emotional makeup is realistic and beautifully endearing. Her monologue in front of Ephram's old store in Act I tugs on the heart in all the appropriate ways. Buckley's penchant for dramatic, heartfelt moments shines bright here. I love how Buckley so masterfully brings her audience into that intimate place of warmth inside her character's lonely reflection and simultaneous fierce determination to re-enter the land of the living in order to make good for herself again.

There's always been something so precious and sweet about Dolly Levi asking for a sign from her dead husband … for his "OK" for her to finally move on. Buckley's delivery may bring tears to your eyes as it did mine. She is simply THAT great and convincing. She brings to life a real Dolly Levi that I don't believe anyone else before her ever has (at least that I've seen).

Buckley certainly let me encounter a whole new experience with Dolly Levi. She allowed me to fall in love with her character in a whole new way, and in the process, I in turn fell in love with Buckley herself all over again. I'm grateful for that. It's a powerful thing to have an emotional connection with someone who's one of your heroes. It's part of the undeniable beauty of the arts.

By the way, for someone who doesn't necessarily have a comedic background, Buckley nails the funny factor in so many moments. Her charm and connection with her audience is heavenly. Buckley delivers exuberant musical numbers, including "Put My Hand In," "Before the Parade Passes By" and the title song. And the way she dances a little jig in the hat shop with "men all over the place" will make your heart explode with joy. 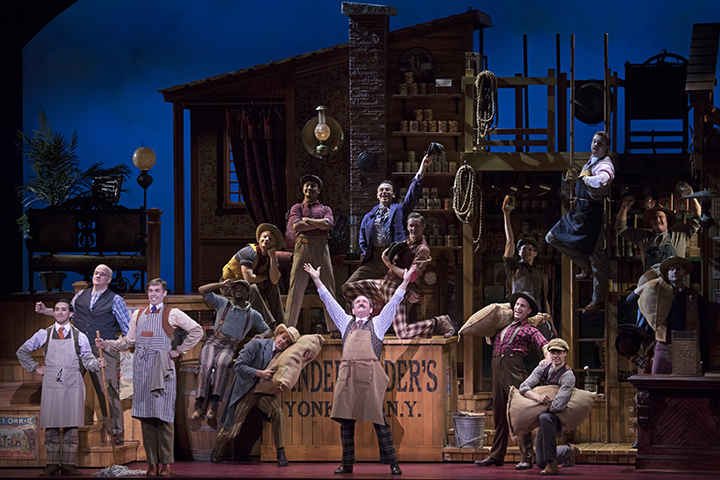 SO MUCH MORE MIND-BLOWING, EXPLOSIVE TALENT

The entire Dolly cast is off-the-charts impressive. You won't find a weak link anywhere in this show. Lewis M. Stadlen gives the audience the perfect, overbearing curmudgeon Horace Vandergelder. I love how Stadlen creates such a spectacular love/hate reality with his approach to Vandergelder. He deftly delivers his character's signature songs: "It Takes a Woman" and "Penny in My Pocket." And you can't help but just love him while his world unravels as he's propelled toward his truth of loving Dolly Levi.

The main supporting characters are perfectly cast. Nic Rouleau is stunning as Cornelius Hackl. His terrific tenor will make you swoon, and he so wonderfully exudes the optimism his character commands. Sean Burns' portrayal of Barnaby Tucker is the best you'll ever see. His comedic ability is magnificent, and his nimble dance moves are monumental. Kristen Hahn's Minnie Fay provides lots of over-the-top laughs. Hometown lady Analisa Leaming (she hails from Murfreesboro and was in the original 2017 revival cast with Midler as an ensemble member/Irene understudy) so beautifully portrays Irene Molloy. Leaming sings like an angel and has a commanding stage presence. She infuses a vivacious sense of adventure in Irene and provides a remarkable performance of "Ribbons Down My Back." This particular foursome — Rouleau, Burns, Leaming and Hahn — provide the show's secondary love stories, and they do so with much aplomb. The side-splitting hat shop scene is so much fun, and in Act II, the four of them perform "Elegance" in superb style. 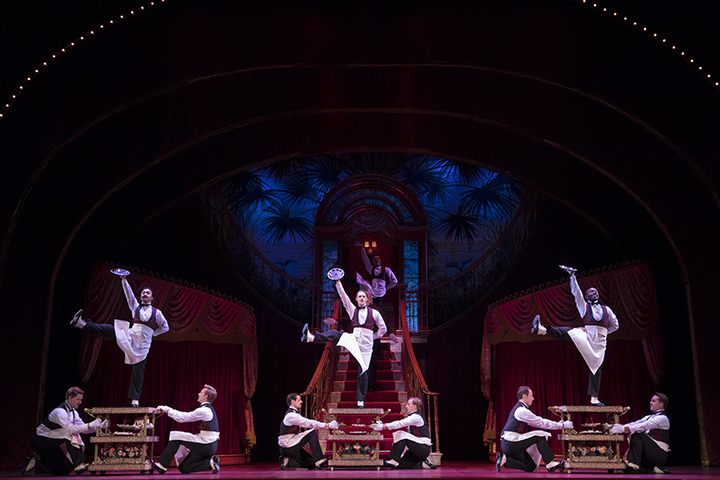 Of course, the show's title number is the favorite when Dolly makes her grand arrival at Harmonia Gardens decked out in that delicious, sparkling red gown with matching feather headdress! Wally Dunn (Rudolph) and the amazing cast of men serving as waiters perfectly prep the main event with their mind-blowing dance moves during the adrenaline-pumping "The Waiters' Gallop."

There has never been a more magnificent touring show come to TPAC than this production of Hello, Dolly! It's solid. It's energy and joy is infectious as it billows off the stage into the audience. Everyone in the cast, from the stars to ensemble members, delivers 200 percent! The actors beautifully serve Herman's musical masterpiece to the nth degree with so many powerful moments that inspire goose bumps.

You really need to go experience this incredible production for yourself, and please take your kids. Hello, Dolly! is a benchmark show, and it's not that often we get to experience the extreme talent of such a Broadway legend as Betty Buckley.