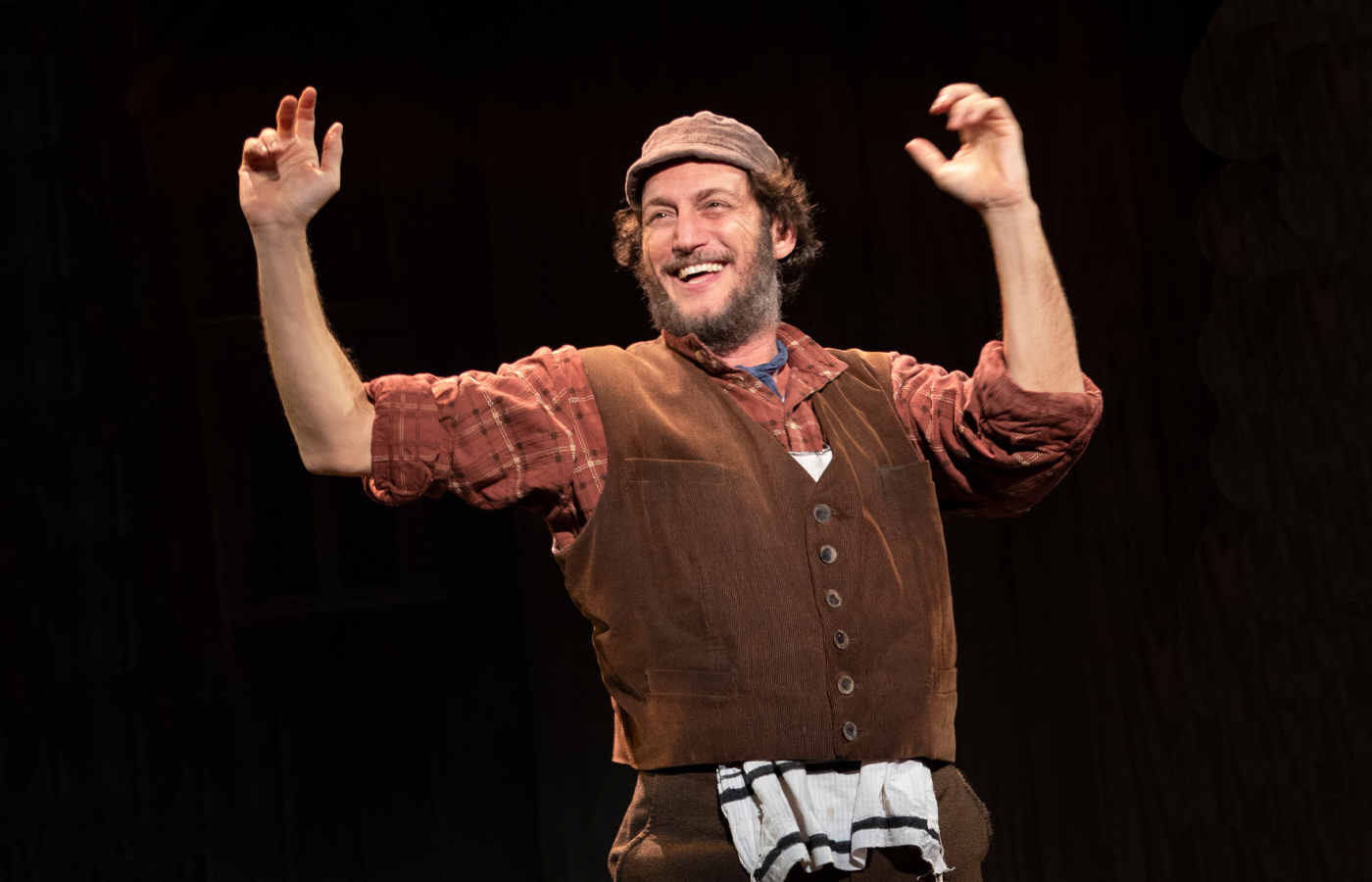 “Break the rules, but remember it’s also important to have tradition and family,” says Yehezkel Lazarov, the Israeli actor and theater director starring as Tevye in the national tour of the beloved family musical Fiddler on the Roof. Fiddler comes to TPAC June 25 – 30, and we recently caught up with Lazarov for a phone interview.

Lazarov has a lengthy list of leading roles onstage and in more than 40 films and television shows. Aside from acting, his theatrical talents include set design, directing and choreography. He’s also the co-founder of the Studio Ankori Middle and High School in Tel Aviv, a school where students are immersed in an interdisciplinary environment in which they can flourish in the arts while having the freedom to think creatively.

HOW LAZAROV RELATES TO TEVYE AS A FATHER

There are many things about Fiddler that resonate personally with the 45-year-old actor, primarily his role as a dad both on and off stage.

“Being a father with three daughters of my own [ages 15, 12 and 8] brings me right into the fatherhood relationship in the show,” says Lazarov. “One of the most beautiful things about Tevye is his need and want to be taking care of things. He cares about everything, but he especially cares about his daughters. He cares about tradition, and he believes that’s the best way for them to be happy. He’s protective of them, and this is the first layer that instinctively brings me into this character,” he adds.

Lazarov’s wife and three daughters are traveling with him on the tour. Opening night in each city, his family comes to see the show, and they enjoy exploring local attractions.

“Traveling to a different place each week, we get to see the most beautiful museums America has to offer. It’s unbelievable the amount of art there is in this country,” says Lazarov. “I cannot imagine doing the tour without my wife and daughters. This is one of the most beautiful presents we can give each other as a family,” he adds, while recommending all families find a way to take a break from their regular routines in order to go somewhere, disconnect and just be close to each other.

“We’re lucky to have that on this tour,” he says.

Lazarov’s family roots share a similar story as the one in Fiddler on the Roof. Lazarov’s 94-year-old grandmother died two months ago, and he remembers her and his grandfather telling him stories when he was a child. They told him about the way they came to Israel from “a Russian village like Anatevka,” and how they had to run away to escape the pogroms.

“Here I am in 2019 onstage having such memories each time I have the scene in Tevye’s barn … memories with my grandfather at 6 years old walking to the synagogue at 5:00 in the morning — and it was a 40-minute walk to a different city,” Lazarov reflects. “I think about those moments in the show, my grandfather holding my hand and telling me the stories of him and his 11 brothers and sisters walking with donkeys and camels through the desert with the whole family making their way to Israel. That’s another layer of how I relate to Tevye,” he adds.

While there are many themes in Fiddler on the Roof, the most prominent are Tevye’s passion for upholding the traditions of his family as they were passed down to him while facing his daughters’ breaking away from them as society continues to evolve and become more progressive.

Lazarov relates to that, too, as he broke with his own family’s Jewish tradition 18 years ago when he married a non-Jewish woman.

“I come from a religious family and brought home a non-Jewish woman in a citizen marriage and we have three kids together. That’s one of the BIGGEST things you can do as a Jew,” Lazarov says. “Today, they love her and my kids, and they accept everybody. We’ve been through tough moments. Every day I’m playing my parents onstage crying for my daughter who’s going to marry this non-Jewish boy. God is really laughing at me right now; someone is making a huge joke!” he laughs.

While Lazarov admits he’s not a religious man anymore, he does still pray and maintains a reverence for his upbringing.

WHY FIDDLER STANDS THE TEST OF TIME

Since its Broadway premiere in 1964, Fiddler on the Roof to this day remains a favorite among audiences. When asking Lazarov why he believes it stands the test of time, he’s says it’s a complicated question because of how in depth the story is in many directions.

“There are several layers. First, it’s just an amazing story, written perfectly, and it’s very funny. There are 14 songs, and each one is competitive by being the most beautiful song ever,” Lazarov says.

Lazarov believes the story is relatable to all audiences because of the many arenas within it, starting with Tevye’s personal circle praying to God and questioning God. Then there is the family circle.

“Everything is happening there. You have love, hate, fear, tradition, rules, bonding of the family, the relationship of Tevye and Golde, the kids, the parents, the son-in-laws — all of the elements everyone can relate to,” says Lazarov.

The other layer is that of the community.

“Each of us wants to feel we are a part of something. Underneath that there is the political relevance for today in terms of the fact that there are still a lot of people who need to leave their roots and home to find a place where they are accepted,” says Lazarov. “You’d have to be blind not to realize what’s happening to your neighbor. The musical ends with people having to leave their home. Director Bartlett Sher’s version is not just a Jewish village somewhere in Russia, it’s a place everyone relates to,” he adds.

Lazarov says he hopes children and teens who come see the show will figure out how they belong to their generation and that they’ll see themselves as people who need to take the good things from whatever traditions they have in their lives and give themselves the freedom to build from there into the next generation.

However, the rule-breaking isn’t about being rebellious for the sheer sake of rebellion; it’s about putting the things we’re all raised with to the test — family traditions, morals and values, religious dogma, societal expectations, political leanings, you name it — and pushing the envelope to find one’s authentic way in the world. In Fiddler, Tevye’s daughters are big-time rule-breakers. They go against their family’s tradition of arranged marriages to Jewish men put together by the local matchmaker, and instead, they decide to marry for love — much to the chagrin of their father at first, but even Tevye comes to realize that love is what matters most.

Whatever shape or form one’s rule-breaking may look like, it’s true there is so much flourish outside of the box (the “norm”), coloring outside the lines, carving one’s own path and sincerely questioning the things put into one’s head as a child. It’s all about each of us becoming who we are meant to be and being able to stand firmly and confidently on our own two feet — and that does involve some the traditions of our upbringing alongside of our evolution apart from them.

“Coming from the outside and looking at America, there are like millions of rules I’ve never heard of before, and it seems people are so much more obsessed about the rules instead of questioning them. It’s important to question the rules,” he adds.