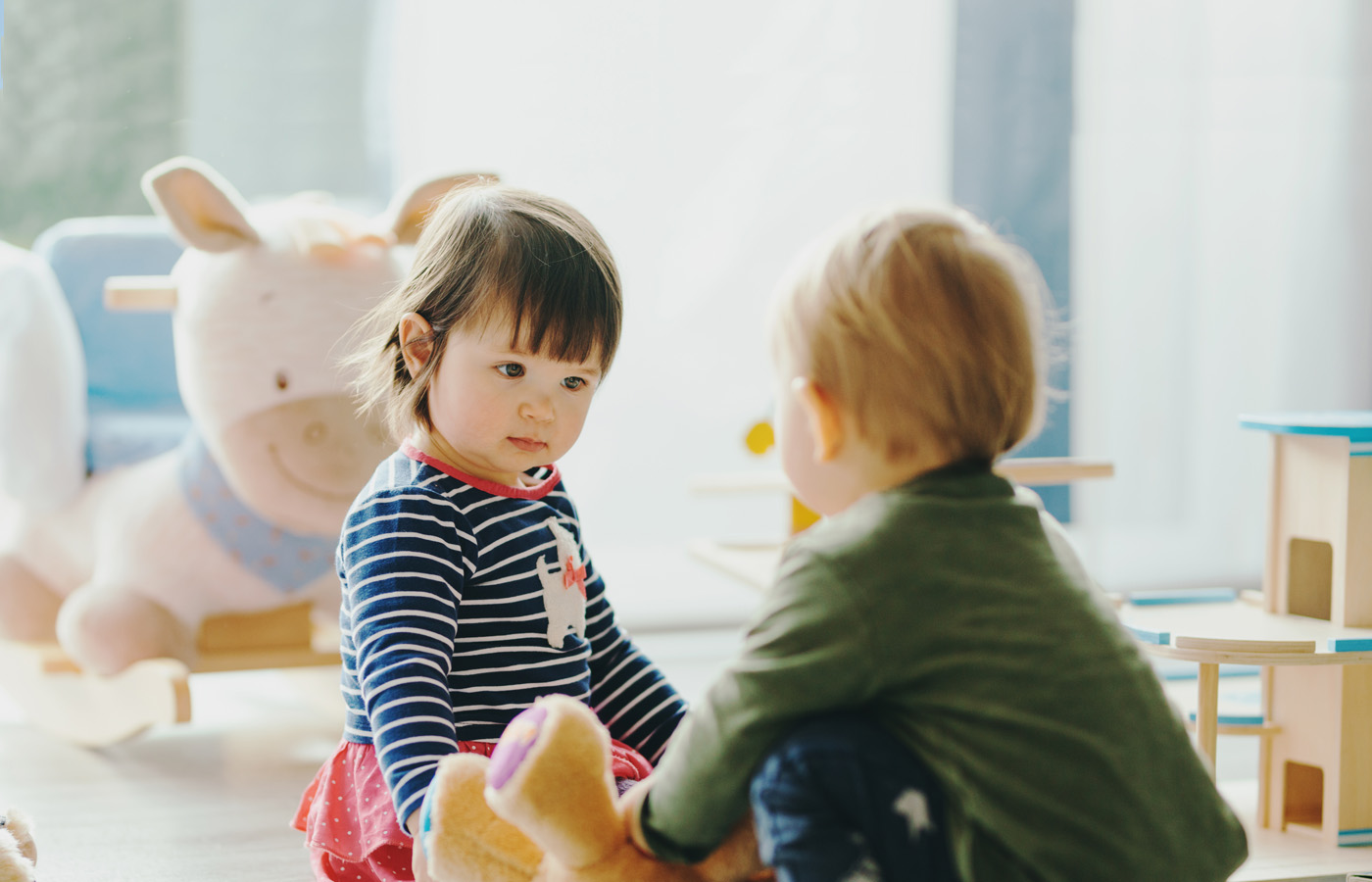 My eyes were opened when my son, Kevin, brought home his preschool class picture. As he pointed from one smiling child to the next, he told me, “That’s Thomas, that’s Riley, that’s Jenny, that’s …” (ominous drum roll, please) “my bully, that’s …”

Whoa there, little fella, back up. Preschool bullying? In a class of 3- and 4-year-olds? Don’t bullies have to be older – or at least capable of opening their own milk at snack time? I scrutinized the image of the brown-haired, blue-eyed boy standing in the back row in the photograph. He wasn’t scowling, and he didn’t have Bluto-like muscles bulging underneath his ordinary little T-shirt. The “bully” didn’t look like a bully at all; he looked like a little kid. Meanwhile, there's a study that says aggression is genetic, that it comes from the parents, and not so much from the environment.

The mama bear in me wanted to march right over to the school, grab that pup by the scruff of his neck and tell him that if he kept harassing my kid, he wouldn’t live to see his fifth birthday. Rest assured, I did no such thing. But my protective impulse was fueled by Kevin’s stories of being banned from the playground pirate fort and pinched during circle time. Maybe not life-threatening things, but definitely not nice either. And as it turns out, my son is not alone.

Not too Young to Be a Bully

We once thought preschoolers were too young for the kind of tormenting we associate with bullying. But sadly, that’s just not true – and because little-kid bullying is so surprising to many parents, it’s not noticed as readily as in older kids, says Henry D. Schlinger, Ph.D., a behavior psychologist and author of The Myth of Intelligence. Adults dismiss it as “kids being kids.”

It doesn’t have to be that way, and that kind of attitude ignores the very real developmental leaps kids make in late toddlerhood. Before age 3, kids don’t have the cognitive ability to feel empathy, says Brenda Nixon, a mom, former preschool teacher and author of The Birth to Five Book (Revelli; $12.99). So a child might hurt another kid emotionally or physically, but he doesn’t really understand how that feels to his playmate. You can’t really say that he’s being mean. After 3, that changes: “The brain has the ability to understand another point of view, so that’s the age that premeditated and purposeful aggression could begin,” says Nixon. In other words, these little troublemakers should know better.

Too often, parents and teachers take a wait-and-see approach with preschoolers. That’s not helping anyone – the victim or the bully. “The problem with ignoring smaller incidents is that intervention doesn’t happen until it reaches a crisis point or someone gets hurt,” says Schlinger. Ouch! I was guilty of this. Before showing me his school picture, my son had told me time and time again that a boy was “bothering” him, and I’d dismissed it.

But When is it Just a Fight?

Preschoolers are active and impulsive, and they’re going to have spur-of-the-moment scuffles, friendship spats and wrestling matches that occasionally get out of hand. Everyday play-related conflict can make kids stronger because they learn through experience how to compromise, negotiate and forgive. Preschool bullying, on the other hand, does the exact opposite. It systematically undermines kids’ self-esteem; whether it’s physical or emotional, it can cause hurt feelings, fear and anxiety – even beginner bullying between little kids. Being picked on, pushed around and shunned is not acceptable at any age. And bullying can have consequences for bullies, too. They may have a hard time forming real friendships, which can lead to problematic relationships in all parts of their lives.

Here’s how to decipher the difference: A playmate might accidentally cause harm during a “That’s mine!” or “No! I saw it first!” tug-of-war over a shovel in the sandbox. A bully, on the other hand, might snatch the shovel away and tell the other child that he’ll throw sand in his face if he tries to get the shovel back. Another sign to watch for is sneakiness or secretive behavior: A bully doesn’t want grown-ups to catch him in the act, so he’ll carry out his bullying covertly; he knows what he’s doing isn’t right.

When 3-year-old Dayna Donovan tried to join another group of girls running around the playground equipment, they deliberately ran away from her, says her mom, Suzanne. To Suzanne’s dismay, Dayna kept running after the girls. They taunted Dayna and told her she wasn’t allowed to go down the slide and threw wood chips on it when she attempted to slide down. “My heart broke when I could see from the look on her face that she understood what was going on,” says Donovan. “Those little girls were being downright mean.” Bullying can be hard to identify because it can spark bad behavior from the “good” kid, too. Brisja Riggins’s 3-year-old son, Brown, was taunted mercilessly by a boy in his nursery-school class. The boy would chant, “Browny towny, Browny towny, Browny towny” over and over until, finally, Brown got so angry and frustrated that he struck back and got in trouble. “There’s only so much taunting a little boy can take before he’s pressed beyond his ability to behave,” says Riggins. That’s where you come in.

If Your Preschooler Has a Bully

STEP ONE: Find out what’s going on. Ask your child, “Did someone hurt you?” or “Can you tell me exactly what he did?” Kids this age may know that what’s happening makes them feel bad, but they may not have a label for it or know how to talk about it. But remember: No matter what your child tells you, even if it makes your blood boil, keep that mama bear under control and remain calm and reassuring for your child. The more supportive you are of his feelings, the more details you’ll get about what happened, how he feels about it and how serious the situation is. The message you want to send him is, “I love you. I’m here for you. Together, we’ll work on a solution.”

STEP TWO: Help him figure out how to respond. Children shouldn’t be expected to deal with bullies on their own, but usually, bullying happens under the radar. So role-play with him, says Joel D. Haber, Ph.D., author of Bullyproof Your Child for Life (Perigee Trade; $14.95). It’s a great way to help a little kid learn, and it’ll boost your child’s confidence.

Tactics he can try:

STEP THREE: Take action yourself. If your child attends day care, nursery school or preschool, set up a meeting with the teacher or caregiver. She may be unaware of the situation – and that’s not necessarily a sign of a bad teacher, just of a good bully. But if you don’t get help, don’t give up. Apply pressure until a solution can be found (even if it means moving the bully or your child to a different classroom or, in some extreme cases, a different school). If the bullying is going on at a playground or play date and you know the parent fairly well, you could try talking to her. Say, “Our kids aren’t getting along very well. Have you noticed?” Don’t be surprised if she seems unconcerned about it. Often, parents are in denial or don’t see their child’s behavior as problematic (as the proverb goes, “The apple doesn’t fall far from the tree.”). Sometimes the best solution may be to avoid that child or find a new playground.

What did I do about Kevin’s bully? Believe it or not, we invited him over. I told Kevin that deep down most bullies were just regular kids who wanted to be liked and have friends. I asked Kevin how the kids at school treated the bully, and he said, “Everyone runs away from him.” Then I asked what he thought about inviting the boy over. I told him I would be there the entire time (to be honest, I couldn’t wait to see this kid in action), and that if he still acted like a bully at the play date, at least we’d both know that we’d tried to be kind and forgiving. That one-on-one play date changed the dynamic between them. The boys didn’t wind up best buddies, but the bullying did stop. And while I might not recommend this course of action for older kids, with little ones it can be effective, even if the only positive outcome is that you gain better insight into the problem.

The time when Kevin was being bullied was heart-wrenching, but in hindsight I’m not sorry we had to deal with it. Most kids will face bullying at some point, and now Kevin’s ready to deal with it again if he has to. Plus, the experience made him a stronger little kid – and me a wiser mama bear.

Deborah Carpenter, a mom of two, is the author of "The Everything Parent's Guide to Dealing with Bullies" (Adams Media; $14.95).