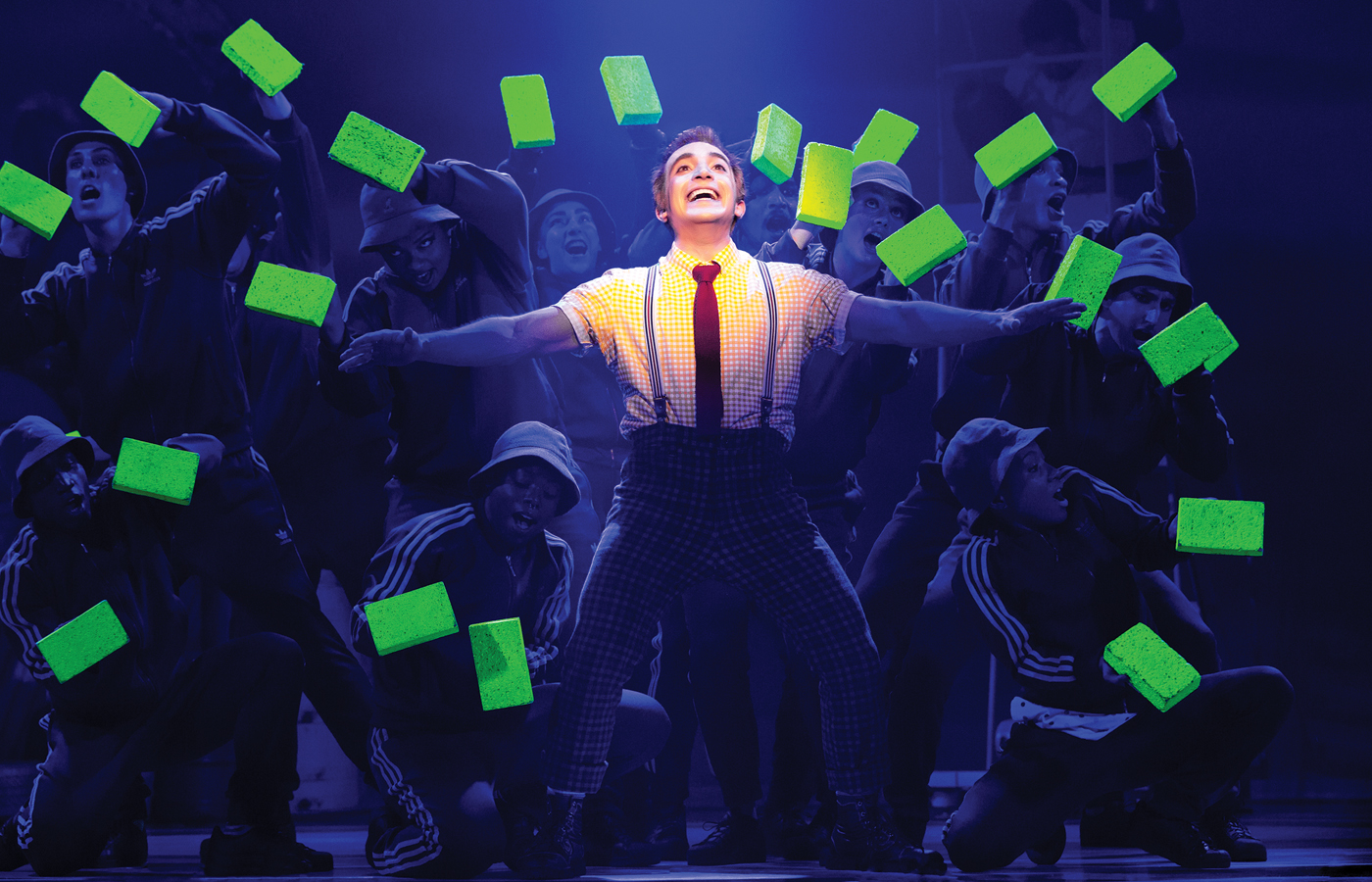 When now 22-year-old Lorenzo Pugliese was a little boy growing up in Scranton, Pennsylvania, watching SpongeBob SquarePants on Nickelodeon, little did he know he’d one day become the character from Bikini Bottom onstage in front of thousands of people. In fact, back then, he didn’t even have stage goals. His dream was to grow up and become a professional baseball player. However, a nudge from a teacher set another ball rolling.

“It was the summer before seventh grade when I did my first musical. My piano teacher roped me into auditioning for High School Musical, and I ended up getting Troy [the lead role],” says Pugliese.

He remembers feeling “really embarrassed” to do it in front of people, but once he stepped onstage for the first time in front of an audience and performed his first number, he says it “was instantly one of the most intoxicating feelings” he’d ever felt.

“I didn’t necessarily write off baseball until my sophomore year of high school when I had to choose between playing ball and doing a production of Rent, and I chose Rent,” says Pugliese. “That was the turning point!” he adds with a lift in his voice.

And right out of graduating from the University of the Arts in Philadelphia, Pugliese landed the leading role of SpongeBob on the first national tour of The SpongeBob Musical.

"It feels like I won the lottery!" he exclaims.

Like many kids who grew up in the late ‘90s and the early ‘00s, Pugliese was an avid SpongeBob viewer.

“It was my favorite show as a kid,” he says.

While growing up to play a character he so much loved as a child is remarkably cool, Pugliese admits the whole thing still doesn’t feel quite real, even though he’s been on the road with the first national tour of The SpongeBob Musical since it opened on Sept. 22 in Schenectady, New York (Nashville is the seventh city on the tour).

“Every now and then, I’ll take a step back and remind myself what I’m doing. It’s kind of overwhelming to know that I’m given this opportunity to play this character I’ve been so fond of since I was a child, and it’s a character most of the world is fond of, too,” he says. “To be able to do this as the second person ever [Ethan Slater originated the role on Broadway] is just a privilege,” he adds.

Pugliese, a self-professed lover of staying in hotels (“ever since I was a kid”), also enjoys the travel opportunity the show affords him.

“I’ve never been to any of the places we’re going to, so it kind of feels like a vacation,” he says.

THE UNIVERSAL APPEAL OF THE SPONGEBOB MUSICAL

The SpongeBob Musical isn’t your typical Broadway show. And don’t jump to conclusions assuming its just a kids’ show because it’s based on a cartoon character. Part of this musical’s magic is that it appeals to kids and adults alike. It’s suitable for a family outing or a date night without the kids.

“I think the thing that surprises the audience the most is just much fun it is. It’s satisfying for fans of the TV show, but it also completely works if you know nothing about SpongeBob because it’s a well-written story with great songs and great performers. It works all the way through,” says Pugliese.

While Pugliese acknowledges that he hopes kids of all ages discover the magic of live theater during their SpongeBob experience, “the most important thing is that we just want to spread joy,” he notes.

And goodness knows, we can all use more of that these days!

"It's very high energy. It's definitely not going to put you to sleep!"

Like Pugliese, 25-year-old Ryan Blihovde grew up watching SpongeBob SquarePants on TV as a child growing up in Chicago, Illinois. The 2016 Belmont University graduate has an impressive resume already for such a young man only three years out of school.

When the drummer made his way to Nashville, his eye was on the recording and live music scenes, but he soon found himself playing for a lot of live theater shows.

"I fell in love with it, and theater became the place I enjoyed being the most. So right now, the Broadway World is where I live," says Blihovde.

He's been the drummer/percussionist for touring productions of The King and I and The Sound of Music, and he also enjoyed a stint with Nashville Shakespeare Festival writing and performing incidental music. Now he's the Foley artist for The SpongeBob Musical, which takes him out of the orchestra pit and puts him right onstage as a unique character in the show.

Blihovde has a big responsibility in the show. He's the one bringing all of the SpongeBob sound effects to life onstage. SpongeBob's walking squeaks. Squidward's tentacle squishes. Sandy's karate chops. Even the sounds of the boulders rolling across the stage. It's all authentic to the TV show.

"Nickelodeon had a huge part of building this show along with [Director] Tina Landau. All of the iconic SpongeBob sounds are actually the Nickelodeon sound effects that Nickelodeon gave to Mike Dobson, who designed the Foley for this show," says Blihovde. "All the sounds that you hear onstage are the exact same sounds from the TV show," he adds.

Among those main sound effect devices, by the way, are squeaky dog toys and slide whistles. Along with those, Blihovde works with numerous other accoutrements to bring an array of comedic cartoon sounds to the stage.

While chatting about the show, Blihovde's enthusiasm is contagious, filled with joy and energy — the two things he says the show is all about.

"There's so much energy and joy in this show. The amazing part of being onstage is seeing the audience laughing and singing along," says Blihovde. "It's very high energy. It's definitely not going to put you to sleep!" he adds with a hearty chuckle.

Amid the visual extravaganza, there's a heart to the story, and Blihovde echoes Pugliese in the appeal to both kids and adults.

"Kids just love the spectacle, and they love seeing these characters come to life in a real human way. They're not cardboard cutouts of the costumes. It's SpongeBob, but he's a real person in our universe," says Blihovde. "For adults, the show is an amazing piece of theater that tells the story about a community that's threatened, and in a time of looming disaster the only way to get through it is by coming together," he adds, noting that the essence of the show is one of bringing joy and optimism into everything one faces.

That's a good rule of thumb to live by, no doubt!