The Tony Award-nominated play and Pulitzer Prize finalist What The Constitution Means To Me is coming to Tennessee Performing Art Center’s Polk Theater on March 29 – April 3.

Cassie Beck (“I Know What You Did Last Summer,” “The Humans” on Broadway) stars in the national tour and is joined by Gabriel Marin and high school students Jocelyn Shek and Emilyn Toffler alternating in the role of the debater.

Playwright Heidi Schreck’s boundary-breaking play, directed by Olivia Butler, promises to breathes new life into the Constitution and imagines how it will affect the next generation of Americans. Fifteen-year-old Heidi earned her college tuition by winning Constitutional debate competitions across the United States. In this hilarious, hopeful and achingly human new play, she resurrects her teenage self to trace the profound relationship between four generations of women and the founding document that shaped their lives.

Schreck’s timely and galvanizing play became a sensation on Broadway where it received two Tony Award nominations among countless other accolades. See the play The New York Times hailed as “not just the best play on Broadway, but also the most important.”

Following Broadway, the show played a record-breaking limited engagement run at the Eisenhower Theater at the John F. Kennedy Center for the Performing Arts in Washington, D.C., as well as two sit down engagements in Los Angeles and Chicago before halting performances due to the COVID-19 pandemic. The success of the Broadway production also spurred a filmed capture of the show, which is now available for streaming on Amazon Prime Video. 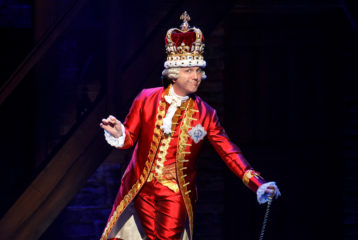